Size750mL Proof85 (42.5% ABV)
This unique single-grain whisky is sourced from Canadian distilleries, where it spends its first 7 years in ex-bourbon casks. It is then transferred into red wine French oak casks from the Mission Hill winery, before being finished in air-dried virgin Hungarian oak barrels. 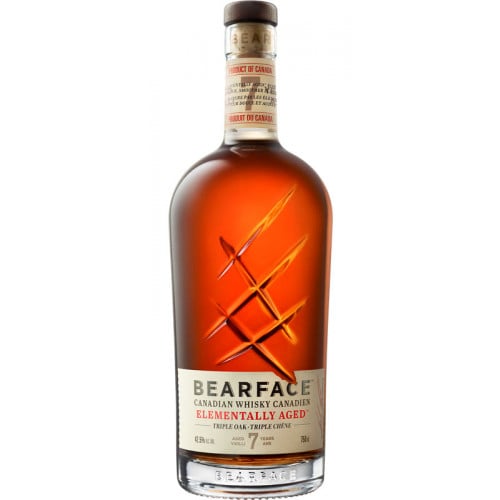 Released in 2018, Bearface Canadian Whisky shakes up what Canadian whisky is all about. The whisky is crafted by a team of "seekers, makers, coopers, blenders, mixologists and even oak scientists," led by Master Blender Andres Faustinelli. Faustinelli, with roots in Venezuela and Italy, found Canadian whisky to be the perfect playground for innovation, as there are fewer regulations getting in the way.

Bearface 7 Year Old Triple Oak is a single-grain whisky that is crafted with 99.5% corn and 0.5% malted barley. The whisky is sourced from Canadian distilleries, where it has spent 7 years maturing in ex-bourbon American oak casks. The whisky is then transferred into red wine French oak casks from the Mission Hill winery, before being finished in air-dried virgin Hungarian oak barrels. This results in a rich and spicy whisky with honey, vanilla, dried fruit, berry, spice, orange zest, and gentle smoke notes. The 85-proof whisky has won several gold medals, including a Double Gold at the 2021 edition of the San Francisco World Spirits Competition.

Get your bottle of this unique Canadian whisky today!

The nose is spicy with honey, caramel, corn, and maple aromas. On the palate, you'll find caramel, vanilla, dried fruit, cranberry, apricot, orange zest, spice, and a touch of smoke. The pleasant sweetness turns to dryness on the satisfyingly long finish.