Size750mL Proof70 (35% ABV)
Beach Whiskey Bonfire Cinnamon is an unconventional American whiskey, naturally flavored with cinnamon and with hints of capsicum. Forgoing traditional barrel aging and using a unique filtration process, Beach Whiskey created a superbly drinkable clear whiskey with a distinctly smooth and round mouthfeel.
Notify me when this product is back in stock. 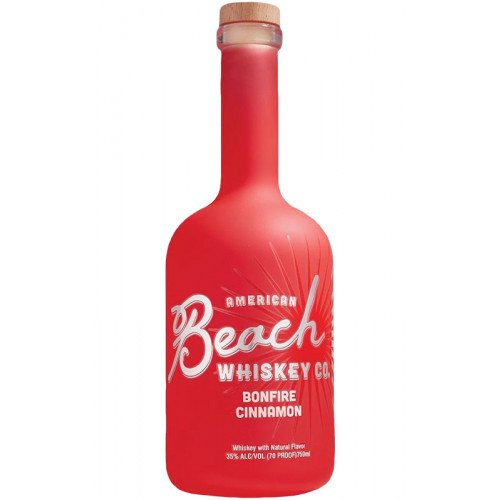 The Beach Whiskey Company, founded in Santa Monica, California, in 2015 by a group of entrepreneurs, entered the adult beverage space as a disruptive brand innovator. The brand made it its mission to reimagine the whisky and the two Beach Whiskey expressions released in June 2016 – Island Coconut and Bonfire Cinnamon – delivered on that promise. In 2017, the Beach Whiskey Company acquired American Harvest, an Idaho-made organic vodka handcrafted in small batches from Rocky Mountain wheat, certified organic agave and Snake River water. In early 2021 Beach Whiskey, along with American Harvest Vodka, was acquired by the investment firm Darco Capital, with the brands becoming part of the portfolio to be managed by the newly established 1776 Spirits Company.

Beach Whiskey is a clear and smooth, naturally flavored whiskey that celebrates the beach lifestyle. Their whiskey is distilled from corn mash at the old Seagrams Distillery in Lawrenceburg, Indiana. Instead of aging the whiskey in the barrels, a unique filtration process is used to create a superbly drinkable whiskey with a distinctly smooth and round mouthfeel. This unconventional whiskey is the perfect accompaniment for your daytime chill as well as your nighttime thrill. The colorful bottles – red for the cinnamon variant and blue for the coconut flavored expression – are custom made of sea glass with etched labeling.

Beach Whiskey Bonfire Cinnamon is a clear American whiskey, naturally flavored with cinnamon and with hints of capsicum. It is bottled at 70 proof and contains a third less sugar than the leading cinnamon brand. It is delicious on its own or mixed in a refreshing cocktail.

This whiskey opens with cinnamon on the nose, followed by lots of cinnamon bark and a hint of capsicum spice and subtle building heat on the palate. The finish is long and lingering, with a pleasant spicy reminder.