Size750mL Proof80 (40% ABV)
The newest addition to Basil Hayden's lineup is a cousin of their 10-year-old high-rye bourbon. This 80-proof limited-release rye is a light yet complex and satisfyingly spicy dram.
Notify me when this product is back in stock. 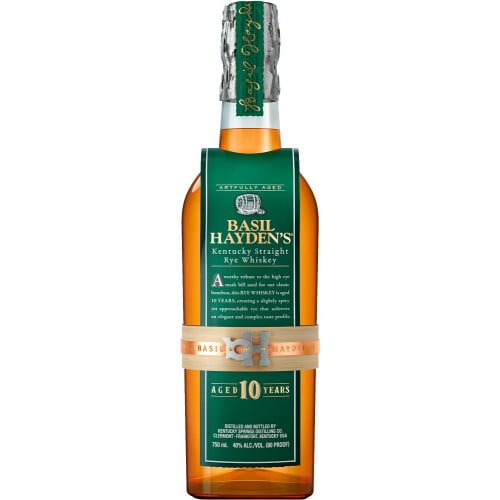 Following the end of the American Revolutionary War, Johannes Reginald Beam emigrated from Germany to the United States and eventually settled in Kentucky County. At the time, Kentucky County was still considered part of Virginia, overseen by a military governor named John J. Bowman. After settling in Kentucky, Beam began harvesting corn and set forth a family tradition by distilling the excess grains he harvested into whiskey. Since then, seven generations of the Beam family have been involved in whiskey production for the eponymous company (the company is actually named after James Beam, who rescued it following Prohibition).

Basil Hayden’s is named after Basil Hayden Sr., a Maryland Catholic who led twenty-five other Catholic families from Maryland to Nelson County, Kentucky (near Bardstown, home of the Jim Beam) in the late 1700s. In addition to being a religious man — Hayden established the first Catholic church in what is now the Commonwealth of Kentucky — Hayden was also a distiller and a pioneering one at that. While most bourbons at the time were made from a traditional corn base, in 1796 Hayden defied convention by mixing small grains into his mash, believing that the spicy rye flavors would provide a striking complement to the corn’s sweetness. Much to the chagrin of the traditionalist set, Hayden proved to be right.

Basil Hayden's is known for their signature spicy high-rye recipes and innovative finishing touches. Their latest limited-edition release — Basil Hayden’s Caribbean Reserve Rye is a true summer whiskey, the latest in a series of successful rye whiskey innovations. Inspired by the sweet and spicy contrast between rye whiskey and rum, this limited edition showcases a blend of 8-year-old Kentucky Straight Rye Whiskey and 4-year-old Canadian Rye Whisky, delivering bold layers of flavor, and a deeply complex distinctive spice followed by toasted oak and vanilla notes. The blend is distinctively finished with Black Strap Rum enhancing the rye character with sweet notes of brown sugar and molasses. The result is a balanced, approachable 80 proof whiskey, perfect for your next summer cocktail.

Released in May 2020, Basil Hayden's 10 Year Old Rye is the newest addition to their lineup and the oldest rye they have on offer. Bottled at 80 proof, it's a light yet complex and satisfyingly spicy dram. This limited-release rye is approachable on one side and full-flavored on the other, making it a perfect choice for the budding rye aficionado.

The nose opens with vanilla, oak, as well as a light, fruity sweetness and equally tame spice. There's a spice on the palate that isn't overbearing, along with oak, toffee, and caramel notes. Finishes with gentle tobacco and warm cinnamon notes.