Size750mL Proof116.7 (58.35% ABV)
Crafted with rye whiskey from Indiana, Poland, Tennessee, and Canada, aged between 4 and 14 years, this unique worldly rye is bottled at a cask strength of 116.7 proof. It has won a Double Gold Medal at the San Francisco World Spirits Competition.
Notify me when this product is back in stock. 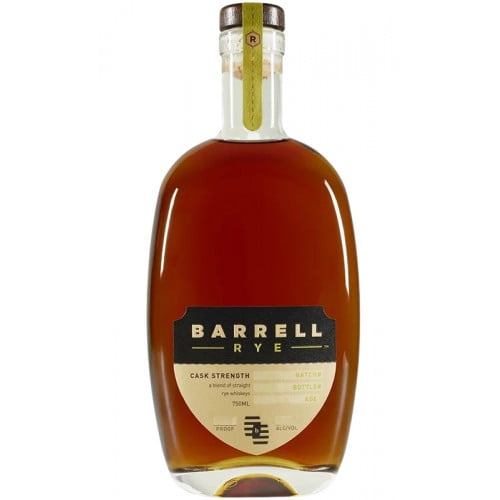 Founder Joe Beatrice and the team at Barrell Craft Spirits have made an art out of seeking exceptional barrels and blending them into unique cask-strength expressions. Barrell Rye Batch 003 is no exception. It's a worldly rye that's crafted with whiskeys from Indiana, Poland, Tennessee, and Canada, aged between 4 and 14 years. The Tennessee rye contributes nuttiness, while the 13-year-old Canadian rye brings earthy, grassy, minty, and apple notes to the table. The Indiana rye highlights candied fruit and spice notes, making for a unique, balanced, yet strangely familiar expression that's bottled at a cask strength of 116.7 proof. The rye whiskey has earned the coveted Double Gold Medal at the San Francisco World Spirits Competition in 2020.

The nose is sweet and earthy with Indian pudding, shortbread, corn, honey, almonds, dark sugar, as well as citrusy and dark fruit aromas. The palate is rich and gently sweet with peanut butter, molasses, coconut milk, green tea, tannins, pine, juniper, ginger, and leather. The finish is earthy with cigar, a touch of smoke, sweet cream, and coconut.