Size750mL Proof117.8 (58.9% ABV)
Aged for a minimum of five years, this bourbon earned a score of 94 points, tying Pappy Van Winkle's 15 Year Old Bourbon, at the Ultimate Spirits Challenge in 2014.
Notify me when this product is back in stock. 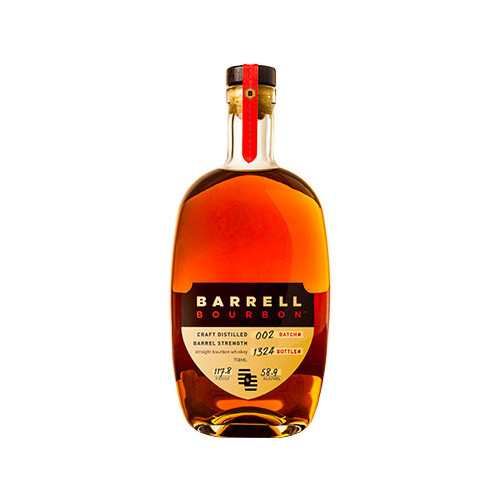 "I started this company to share my passion for unique, high-quality spirits," says Joe Beatrice, the founder of Barrell Bourbon Co, whose self-proclaimed goal is to select and bottle the finest small-batch, craft-distilled bourbon. "At Barrell Bourbon, we support the time-honored traditions of distilling, a patient art designed to give you a better tasting bourbon. At every stage of bourbon making, subtle choices are made that impact the whiskey. Though all bourbons are made from the same basic ingredients, it's the choices the master distiller makes that shapes his creation."

Barrell Bourbon Batch #2 is made from a mash of 70% corn, 25% rye and 5% malted barley. After the grains are sourced, they are mashed and fermented before being distilled through a copper still. While distillation takes place in Tennessee, the bourbon is matured for a minimum of five years in new, American oak barrels that are laid to rest in Kentucky. The intense Kentucky heat causes the wooden barrel staves to expand and contract, interacting with the whiskey and contributing notes of vanilla, dark cherries, cinnamon apple and caramelized oranges as it matures.

Once the bourbon has matured, it is bottled at cask strength (117.8 proof) without the use of chill-filtration (chill filtration removes the cloudiness that is natural to bourbon, but also removes the fatty acids and esters which contribute to the whiskey's overall flavor and complexity). As a result, the bourbon has a dark amber color, along with an aroma of woody caramel, leather, vanilla and baking spices. The aroma gives way to notes of charred oak, vanilla beans, white pepper and rye on the palate, and leads to a bold finish with hints of toffee and butterscotch.

Barrell Straight Bourbon Whiskey earned a score of 94 points, tying Pappy Van Winkle's 15 Year Old Bourbon, at the Ultimate Spirits Challenge in 2014. Only seven barrels were used in the creation of Batch #2. Pick up a bottle today!