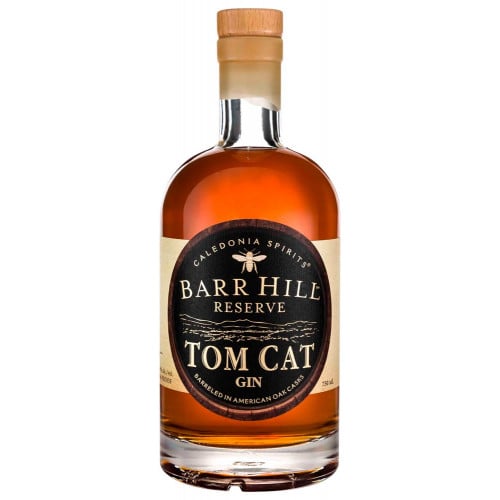 Todd Hardie, Caledonia Spirits founder, spent over four decades as a beekeeper before deciding to incorporate his raw, organic Vermont honey into craft spirits. His first honey house, which required a $1,000 down payment and had a mortgage of $133 per month, was home to 180 colonies. Coincidentally, the land in northern Vermont where he kept his first bee houses straddles the Québec border, and had been the site of a Prohibition-era speakeasy named Bucket of Blood.

Tom Cat Reserve Gin begins its life as Barr Hill Gin, a London dry-style gin that, unlike other gins, uses only one botanical during distillation: juniper.  The rest of its complex, gentle flavor profile comes from the raw honey, which is added during a second distillation. "Honey is incredibly expensive to harvest," Hardie notes, and harder still to ferment. "Even with a Bachelor's of Science in agriculture, I didn't know that the way you're taking care of your bees and your people goes into every product — every bottle,"he says. "With a strict science background, they don't teach you that, but it's true. The consumer will know the difference between a good and a mediocre product."

Following distillation, which occurs in a 25-gallon recycled stainless steel still (a testament to Hardie's commitment to environmental sustainability), the gin is matured for three to four months in new American oak casks. "While resting in the barrels, the gin is constantly transforming," says Hardie. "The charred barrels contribute to the brown color of the spirit and give our Barr Hill Reserve Tom Cat its complex flavor." Tom Cat Reserve has also has notes of juniper and ginger, but has touches of caramel, vanilla and honey that are robust and bountiful.

"The best fertilizer is always the footprint of a farmer," Hardie says.

Touches of caramel, vanilla and honey that robust and bountiful.