Size750mL Proof80 (40% ABV) - May vary
This whisky was named “World’s Best South African Grain Whisky” at the 2016 World Whiskies Awards.
Notify me when this product is back in stock. 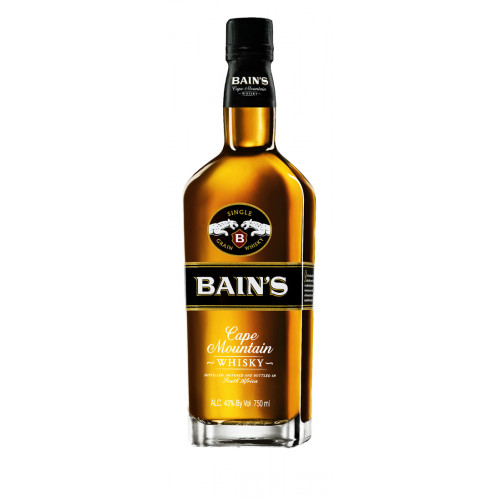 Bain's Cape Mountain was launched in 2009. This whisky is a critically acclaimed label distilled in Wellington, Western Cape, South Africa at the James Sedgwick distillery. This is South Africas first whisky produced from 100% yellow maize. The label is owned by Distell, a South African multinational brewing and beverage company.

Bain's whisky is Inspired by the Cape Mountains. It is named after Andrew Geddes Bain, the man responsible for bullding the Bainskloof Pass. Andy Watts is the 6th Master Distiller of the company, since its founding in 1886.

Bain’s Single Grain Whisky is double matured initiallly in specially selected first-fill bourbon casks for three years, before being transfer to first-fill bourbon casks for an additional 18 to 30 months. This process extracts a full rich flavor onto the spirit. Bain's was named the World’s Best Grain Whisky at the annual Whisky Magazine’s World Whisky Awards in London in 2013.

Vanilla, toffee, and flowers on the nose. The palate sweet with a hint of spice and sweet undertones of oak. The finish is long warming and smooth.