Size750mL Proof80 (40% ABV)
This medium-bodied black rum from Bacardi is aged in heavily charred oak barrels and filtered through charcoal for additional flavor. Adored for its rich and dark flavors of tropical fruit.
Notify me when this product is back in stock. 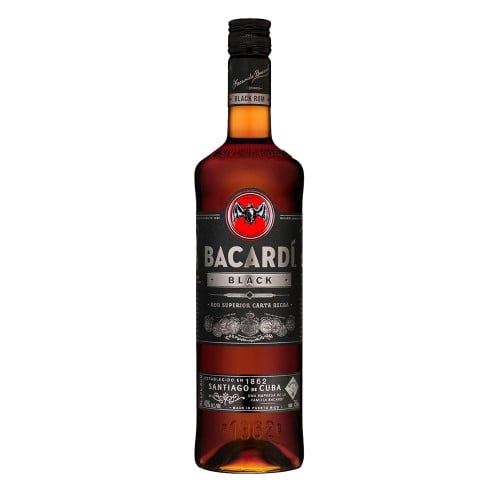 Blended by the Maestros de Ron at Bacardi, Bacardi Black Rum is a medium-bodied black rum. Due to ageing in heavily charred oak barrels – the rum was then filtered through charcoal for additional flavor – this offering boasts rich and dark flavors of tropical fruit, buttery caramel, and vanilla, all rounded up with smoky licorice and molasses notes. Bottled at 80 proof, the label honors Emilio Bacardi, second generation owner of Bacardi and freedom fighter for Cuba. This black rum is the perfect option for dark rum cocktails.

Expect to be greeted by a toasted and nutty nose. The palate is distinctly tropical with sweet tropical fruit, buttery caramel, and vanilla notes. The finish is smoky with flavors of licorice and molasses.