Learn more
Size750mL Proof100 (50% ABV)
Third release in Angel's Envy Cellar Collection, this is a blend of bourbons, finished in carefully selected Madeira casks. Highly limited edition with only 3,360 bottles made.
Notify me when this product is back in stock. 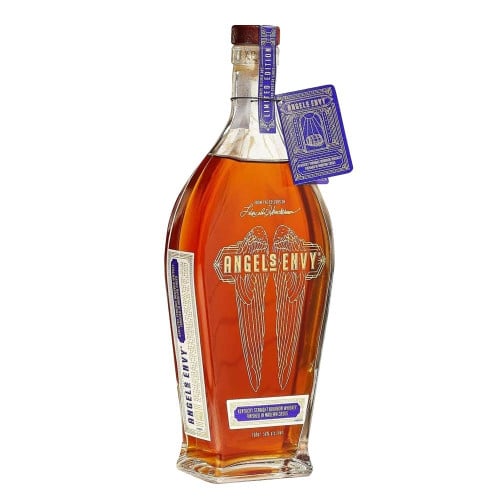 Inspired by the history and the level of craftsmanship required in Madeira wine production, the Henderson visited the island of Madeira in 2015, where they sampled more than 30 varieties of Madeira wine to find the perfect Madeira wine casks for their third Cellar Collection release. The result was Angel's Envy Kentucky Straight Bourbon Finished in Madeira Casks. This limited-edition release is a blend of bourbons, finished for 1 year in Madeira casks. Bottled at 100 proof, expect aromas of caramelized banana, brown sugar, raisins, and almonds, while the palate offers oak, grass, smoke, leather, chocolate, and dried cherries.

After retiring from Brown-Forman, Henderson decided to go rogue and launched Angel's Envy Bourbon. "Angel's Envy is a lot of things," said Henderson. "It's my life's work. It's a whiskey of incomparable smoothness. It takes into account over 200 years of bourbon heritage and mingles it with over 400 years of port wine heritage." The name is derived from the term "angel's share" ― the portion of whiskey that evaporates as it ages in wooden barrels. After tasting the bourbon, Henderson realized that the angels might want a larger cut. The family operation is now run by his son Wes Henderson.
Explore all Angel's Envy bottles >>

The nose offers aromas of caramelized banana, brown sugar, raisins, and almonds. The palate is complex with flavors of oak, grass, smoke, leather, chocolate, and dried cherries. The finish is smooth and lingering with notes of almond and hazelnut.