Size750mL Proof120.4 (60.2% ABV)
The annual Cask Strength release has the folks at Angel's Envy choose the finest barrels from their rickhouse for an extended period of finishing in Port wine barrels. Unique, complex, and balanced, this limited-edition expression is bottled at 120.4 proof.
Notify me when this product is back in stock. 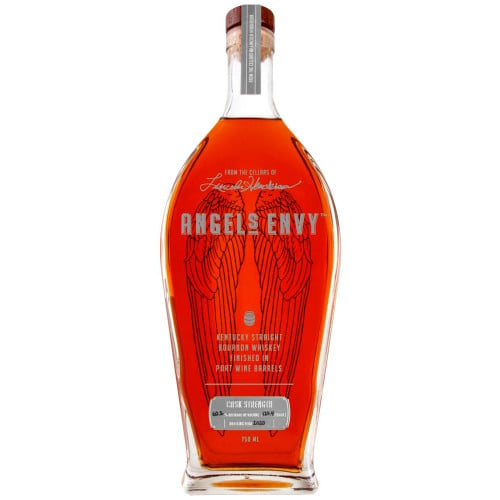 Angel's Envy Cask Strength Bourbon has them choosing the best barrels from their rickhouse each year and was named "Best Spirit in the World" in F. Paul Pacult's Spirit Journal in 2013. For the 2020 release, only a handful barrels were chosen for the extended finishing process in Port wine barrels. Bottled at 120.4 proof, it's a unique, rare, and delicious spirit of remarkable complexity.

Grab one of these exquisite limited-edition bottles today!

After retiring from Brown-Forman, Henderson decided to go rogue and launched Angel's Envy Bourbon. "Angel's Envy is a lot of things," said Henderson. "It's my life's work. It's a whiskey of incomparable smoothness. It takes into account over 200 years of bourbon heritage and mingles it with over 400 years of port wine heritage." The name is derived from the term "angel's share" ― the portion of whiskey that evaporates as it ages in wooden barrels. After tasting the bourbon, Henderson realized that the angels might want a larger cut. The family operation is now run by his son Wes Henderson.
Explore all Angel's Envy bottles >>

The deep amber bourbon opens with apricot, plum, baking spices, brown sugar, leather, oak, and vanilla on the nose with a distinct cherry note that intensifies on the palate. It is joined by salted chocolate, orange zest, and a touch of wood. The tannic, citrusy, and fruity finish is long with lingering notes.