Size750mL Proof92 (46% ABV)
This incredible whisky is handcrafted from Indian barley grown at the foothills of the Himalayan mountains in a region known as Punjab, and peated malt sourced from Scotland.
Notify me when this product is back in stock. 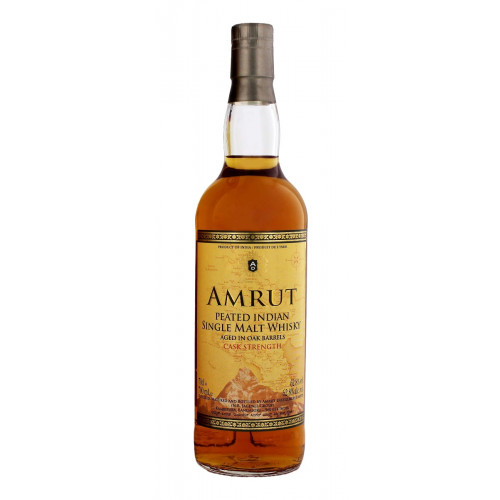 Amrut Peated Single Malt Whisky is made from Indian barley grown at the foothills of the Himalayan mountains in a region known as Punjab (Punjab means "the land of five rivers”), and peated malt sourced from Scotland. The Himalayan mountain water, along with the cold winters and fiery summers, result in a unique type of barley that is rich in nutrients and flavor. After local Indian farmers harvest the barley, it is carefully mashed and distilled in small batches to preserve the natural aroma of the Indian terroir. The whisky is then aged at an altitude of 3,000 feet above sea level in oak barrels that are laid to rest for a minimum of 4 years.

During maturation, the incredibly intense Indian sun causes the whisky and oak to mingle often. In addition, the heat also leads to much greater rates of evaporation — approximately 12% of maturing whisky evaporates each year in India (this is referred to as the angel's share), compared to just 2% in Scotland. As a result of the intense temperatures and humidity, whisky ages nearly three times faster in India as compared to Scotland.

Subtle peat on the nose with earthy elements, spice and fruit. The palate is peaty, with spice, herbal notes, pepper and molasses. The finish is strong and malty with peat. The finish is clean with oak.