Be the first to review this product
Bottled at cask strength, this whisky earned a score of 92 points from Jim Murray's Whisky Bible.
$105.99
Add to Wish List

Amrut Distillery traces its history back to 1948 when, just one year after India declared its independence from Great Britain, Radhakrishna Jagdale began manufacturing rum and brandy, which he supplied to army canteens throughout India. After his death in 1976, the mantle was passed to his son, Neelakanta Rao Jagdale. When the younger Jagdale became Chairman of Amrut Distillery, he began experimenting with more innovative whiskies.

Amrut Single Malt Whisky is made from Indian barley grown at the foothills of the Himalayan mountains in a region known as Punjab (Punjab means "the land of five rivers"). The Himalayan mountain water, along with the cold winters and fiery summers, result in a unique type of barley that is rich in nutrients and flavor. After local Indian farmers harvest the barley, the grains are carefully dried over a peat flame to approximately 23 phenol parts per million. Then, the barley is mashed and distilled in small batches to preserve the natural aroma of the Indian terroir. Following distillation, the whisky is matured at an altitude of 3,000 feet above sea level in oak barrels that are laid to rest for a minimum of 4 years.

Amrut Peated Cask Strength Indian Single Malt Whisky has an aroma of peat, citrus, fruit cake and dried berries that gives way to notes of chocolate, molasses and brown sugar on the palate. The finish is slightly sweet, with a touch of bonfire smoke balanced against notes of ripe apples.

The whisky earned a score of 92 points from Jim Murray's Whisky Bible. "There is demand, but we can't service it," says Jagdale, Amrut's Chairman. "We cannot accelerate the maturation process. A good whisky can never be a mass product."

Aroma of peat, citrus, fruit cake and dried berries that gives way to notes of chocolate, molasses and brown sugar on the palate. Finish is slightly sweet, with a touch of bonfire smoke balanced against notes of ripe apples. 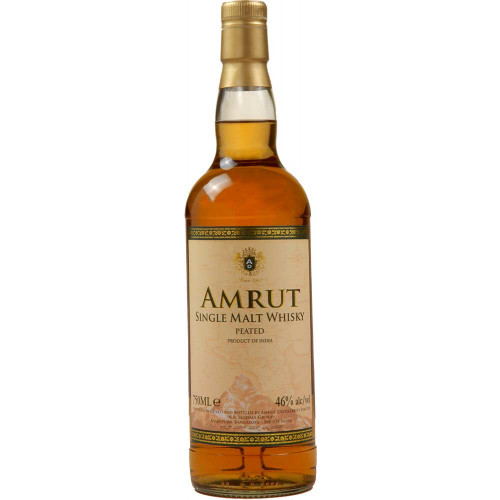