Be the first to review this product
This unique whisky is placed in ex-bourbon barrels at the beginning and end of its aging process, with sherry cask maturation “sandwiched” in between, before being bottled at a punchy 114.2 proof.
$144.99
Add to Wish List

Amrut Distillery traces its history back to 1948 when, just one year after India declared its independence from Great Britain, Radhakrishna Jagdale began manufacturing rum and brandy, which he supplied to army canteens throughout India. After his death in 1976, the mantle was passed to his son, Neelakanta Rao Jagdale. When the younger Jagdale became Chairman of Amrut Distillery, he began experimenting with more innovative whiskies.

Amrut Single Malt Whisky is made from Indian barley grown at the foothills of the Himalayan mountains in a region known as Punjab (Punjab means "the land of five rivers"). The Himalayan mountain water, along with the cold winters and fiery summers, result in a unique type of barley that is rich in nutrients and flavor. After local Indian farmers harvest the barley, it is carefully mashed and distilled in small batches to preserve the natural aroma of the Indian terroir. The whisky is then aged at an altitude of 3,000 feet above sea level.

During maturation, the incredibly intense Indian sun causes the whisky and oak to mingle often. In addition, the heat also leads to much greater rates of evaporation — approximately 12% of maturing whisky evaporates each year in India (this is referred to as the angel's share), compared to just 2% in Scotland. As a result of the intense temperatures and humidity, whisky ages nearly three times faster in India as compared to Scotland.

Amrut Intermediate Sherry Single Malt Scotch Whisky is first aged in ex-bourbon barrels before being transferred to an “intermediate” sherry cask, where it rests briefly before being placed back in ex-bourbon barrels to finish its aging. This innovative new sandwiching technique allows the sherry flavors to “burn in” as the whisky continues to age in the ex-bourbon casks, and imparts a beautiful nose unto the whisky filled with aromas of port, candied cherries, vanilla and strawberry jam. The palate is equally as enthralling, with notes of cinnamon and nutmeg mingling with orange peel and anise before leading to a long, dry and oaky finish.

Beautiful nose filled with aromas of port, candied cherries, vanilla and strawberry jam. The palate is equally as enthralling, with notes of cinnamon and nutmeg mingling with orange peel and anise before leading to a long, dry and oaky finish.

This product is available in:   IL 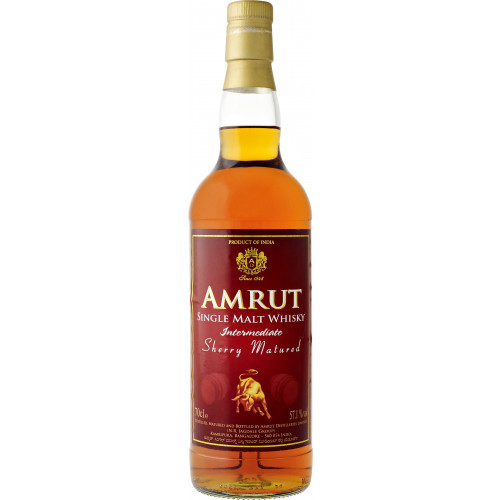