Learn more
Size750mL Proof120 (60% ABV) *Please note that the ABV of this bottle may vary
The makers of the first single malt in India have another first: the first Indian peated single malt to be aged for 10 years. It has spent its first 7 in a first-fill Pedro Ximenez sherry butt before being transferred into an ex-bourbon and virgin oak barrel for another 3 years.
Notify me when this product is back in stock. 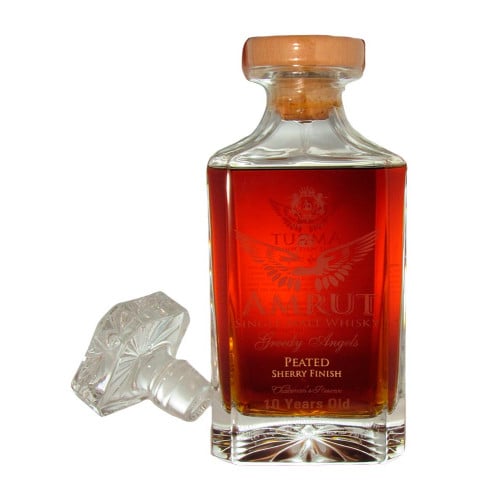 Amrut Single Malt Whisky is made from Indian barley grown at the foothills of the Himalayan mountains in a region known as Punjab (Punjab means "the land of five rivers"). The Himalayan mountain water, along with the cold winters and fiery summers, results in a unique type of barley that is rich in nutrients and flavor. After local Indian farmers harvest the barley, it is carefully mashed and distilled in small batches to preserve the natural aroma of the Indian terroir. The whisky is then aged at an altitude of 3,000 feet above sea level in oak barrels that are laid to rest for a minimum of 4 years.

It's this rapid evaporation that is referred to by Amrut's Greedy Angels series. This line contains their oldest expressions, including the 10 Year Peated Sherry Finish. Distilled using Scottish peated barley, it spent its first 7 years in a cask that used to hold Pedro Ximenez sherry. It was then transferred into ex-bourbon and virgin oak barrels for its final 3 years ― the opposite of how the process is usually done, where the sherry casks are most commonly used for finishing. Bottled at a hefty 120 proof, it's an intense and complex drinking experience with a balance of spice, fruit, and smoke notes.

Grab one of only 324 bottles that were available worldwide!

It's an extremely complex whisky with dried fruit and sherry notes on the nose along with peat smoke and spice. There's more spice on the palate with some barrel char and hints of orange zest. The smoke lingers on the finish.