Size750mL Proof123.6 (61.8% ABV)
Aged under the intense Indian sun, this whisky earned a score of 91 points from the Beverage Testing Institute in 2013.
Notify me when this product is back in stock. 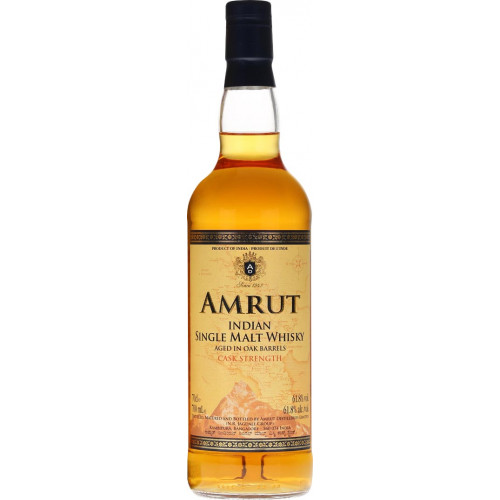 Amrut Cask Strength Indian Single Malt Whisky is made from Indian barley grown at the foothills of the Himalayan mountains in a region known as Punjab (Punjab means "the land of five rivers"). The Himalayan mountain water, along with the cold winters and fiery summers, result in a unique type of barley that is rich in nutrients and flavor. After local Indian farmers harvest the barley, it is carefully mashed and distilled in small batches to preserve the natural aroma of the Indian terroir. The whisky is then aged at an altitude of 3,000 feet above sea level in oak barrels that are laid to rest for a minimum of 4 years.

The whisky earned a score of 91 points from the Beverage Testing Institute in 2013.

"There is demand for our whisky, but we can't service it," says Jagdale, Amrut's Chairman. "We cannot accelerate the maturation process. A good whisky can never be a mass product."

Aroma of intense caramel, malt, dark chocolate and oak that gives way to notes of vanilla, espresso beans, smoke and a touch of honey on the palate. Finish is long yet smooth, with hints of mellow charcoal, dried apricots and tobacco.