Size750mL Proof96 (48% ABV)
Crafted by a 12th generation master distiller, this whiskey is matured in French oak wine barrels and chardonnay casks.
Notify me when this product is back in stock. 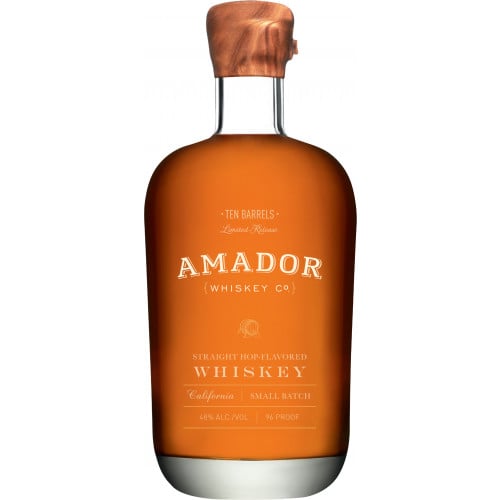 The mission of the Amador Whiskey Company is to "partner with the finest craft distilleries in the United States to create limited-edition whiskeys." The company's first release was crafted by Charbay Master Distiller Marko Karakasevic. Thirty years ago, Karakasevic — a 12th generation Master Distiller — emigrated to California and became a pioneer in the American craft spirits movement by opening the doors to one of the first craft distilleries in the United States. Over three decades later, Karakasevic continues to release some of the most unique and interesting spirits in the world.

Amador Ten Barrels Straight Hop-Flavored Whiskey is made from a marriage of 60% straight malt whiskey and 40% hop-flavored whiskey. The hop-flavored whiskey is crafted from Racer 5 IPA, a craft beer brewed by the Bear Republic Brewery. The IPA is full-bodied, and contributes a malty hoppiness to the whiskey without overwhelming the whiskey's flavor profile.

After the straight malt whiskey and hop-flavored whiskey are distilled, they are matured separately for over two years in French oak wine barrels. Then, the whiskies are "married in our family chardonnay barrels for another year before being bottled," says Karakasevic.

The whiskey has an aroma of caramel, cloves and vanilla. Notes of hop-spices, two-row barley, toffee, butterscotch, rich citrus, orange, warm caramel and nougat dominate the palate and lead to a long, ever-lasting finish.

Only ten barrels of this whiskey will ever be made.