Learn more
Size750mL Proof92 (46% ABV)
A revival of an old style, this whiskey bridges the gap between single malts and bourbons. Mashed, fermented, distilled in small 150-gallon pot stills, and aged at All Points West's Ironbound base of operations, it has been awarded the Gold Medal and named "Whisky of the Year" by the USA Spirits Ratings.
Notify me when this product is back in stock.

This product is available in: NJ, NY Unfortunately, we can't ship to PO Boxes and APO addresses. 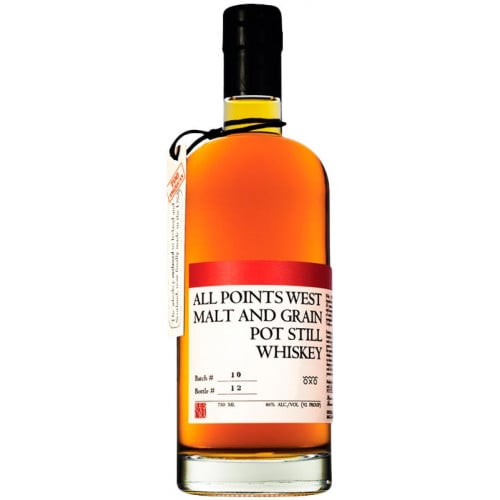 About All Points West Malt and Grain Pot Still Whiskey

The All Points West Malt and Grain Pot Still Whiskey is a unique expression that revives an old tradition. In 1846 the Corn Laws ― trade restrictions on imported grain and food in the United Kingdom ― were repealed, signifying a shift towards free trade in the UK. That was when Indian corn started coming in from across the pond, finding its way into the unmalted grain bills of whisky. Then, in 1908, a commission was formed, deeming malt and corn pot-still whisky "too American" and inherently dangerous, as its sales would rise along with the palates of the Englishmen getting accustomed to corn-based whiskies. The style faded away and is making a return with All Points West's "Trans-Atlantic" whiskey ― malt whiskey in an Irish pot-still style.

The craft whiskey is mashed, fermented, distilled in small 150-gallon pot stills, and aged ― the entire process taking place at their base of operations in Ironbound. Irish and German malt is combined with corn and water from the protected Newark Watersheds in the Appalachian Highlands. The spirit is then aged for a minimum of 24 months in new American oak before being bottled at 92 proof. It has been awarded the Gold Medal and named "Whisky of the Year" by the USA Spirits Ratings.

About All Points West

Situated in Newark, New Jersey, the All Points West Distillery was founded by Gil Spaier and takes its inspiration from the numerous breweries that were located in the city. None of the 26 that were quenching the thirst of countless immigrants by 1920 remain today.

Named after the railroad that connected the ports of New Jersey with the rest of America, the distillery crafts a range of whiskey, vodka, and gin under the brand names All Points West Malt and Grain Pot Still Whiskey, Bone Black Vodka, and Cathouse Gin ― all right there in the melting pot of different cultures that is the Ironbound neighborhood. They also offer tours, tastings, cocktails, and bottles on the premises on the weekends.
Explore all All Points West bottles >>

The amber spirit opens with toasted oak, vanilla, cedar, and a hint of smoke. Fruit, oak, and vanilla are on the palate along with floral undertones and black tea. Finishes with a pleasant sweetness and lingering notes.