Size750mL Proof92 (46% ABV)
Reviving a lost whiskey style, this bottle is an American take on Old World distilling traditions. Close to American bourbon, it's made from corn, malted wheat, malted barley. Silver winner at the 2019 John Barleycorn Awards.
Notify me when this product is back in stock. 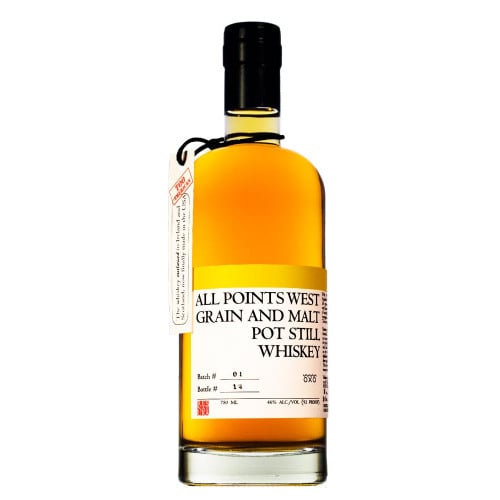 About All Points West Grain and Malt Pot Still Whiskey

Bringing forward an American take on Old World distilling traditions of immigrants from Netherlands, Ireland, Scotland and Britain, All Points West Distillery is situated in Newark, New Jersey. It's inspired from the numerous breweries that were located in the city in the past, even though none of the 26 that were quenching the thirst of countless immigrants by 1920 remain today. The distillery boasts a Trans-Atlantic take on main cereal grain spirits, whiskey, vodka, gin and historic NY/NJ harbor style rum under the brand names All Points West Malt and Grain Pot Still Whiskey, Bone Black Vodka, Cathouse Gin and Kill Van Kull Single Pot Still Rum ― all right there in the melting pot of different cultures that is the Ironbound neighborhood. Named after the railroad that connected the ports of New Jersey with the rest of America, they also offer tours, tastings, cocktails, and bottles on the premises on the weekends for those in the area.

The All Points West Grain and Malt Pot Still Whiskey is one of their two expressions that revive an old tradition and make a comeback of "Trans-Atlantic" whiskey. In 1846 the Corn Laws ― trade restrictions on imported grain and food in the United Kingdom ― were repealed, signifying a shift towards free trade in the UK. That was when Indian corn started coming in from across the pond, finding its way into the grain bill in UK pot and patent still whisky. Then, in 1908, a Royal commission was formed and malt and corn pot-still whisky was suddenly considered "too American". All Points West is bringing back this lost style.

West Grain and Malt Pot Still Whiskey contains more corn and is closer to American bourbon as opposed to their West Malt and Grain Pot Still, Whiskey, which is closer to Irish Whiskey. Mashed, fermented, distilled in two small Holstein style copper and steel stills and aged in used and new American white oak, all at one site in Newark. The grain bill includes corn, malted wheat, malted barley, bringing together water from the Newark Watersheds and Appalachian Highlands. Bottled on site at 92 proof, you should expect malted barley on the nose as well as heather and honey on the palate. The finish is very full and round. This small batch whiskey was the silver winner at the 2019 John Barleycorn Awards.

On the nose, you'll find malted barley. On the palate, expect heather and honey notes. The finish is full and round.