Size750mL Proof88 (44% ABV)
This San Andrés Mezcal is crafted from handcrafted from agave Espadín and Bicuishe from San Andrés in Xitlapehua, Oaxaca. 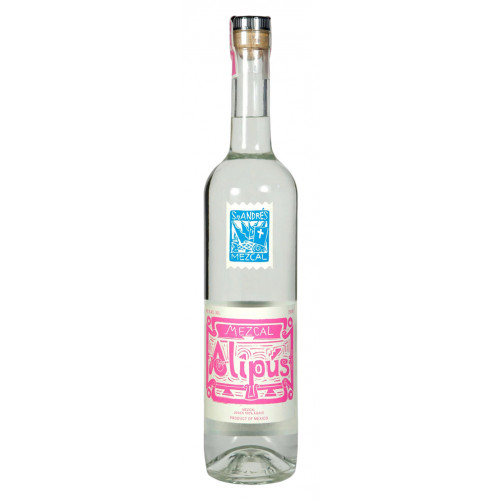 Alipús is a line of traditionally hand-crafted mezcals with smoky overtones produced by a socially conscious co-op of mezcaleros, seeking to stimulate the Oaxacan economy with mezcal production. Each expression features a different artisanal family producer.

Nestled alongside the dusty road to the San Juan del Rio Alipús destilería, wild agave tobalá rise above the chaotic desert foliage. Irrigated only by the rain, the high-altitude upland plateau features a terroir that crafts the very essence of Alipús Mezcals. Owned by the Cruz family, Alipús Mezcals are bottled by Destilería Los Danzantes, an artisanal distillery in Santiago Matatlan, south of Oaxaca city, and distributed (in the US) by Craft Distillers. San Juan del Rio is one of the many family distilleries in rural pueblos in the state of Oaxaca, that produce mezcal.

Joel Antonio Cruz produced 30,000 bottles of Alipús in 2015, and after deciding to remain small scale, turned to his younger cousin Rodolfo Juan Juarez, to take over distillation for export. The youthful Maestro Mescalero handcrafts Alipús in the quaint riverfront distillery. The Cruz destilería operates as a co-op and has four copper pots.

San Andrés Mezcal is crafted from handcrafted from agave Espadín and Bicuishe from the San Andrés, Oaxaca region. Planted nearly 5000 feet from the ground, the soil is mostly shale, which is not the most fertile, but some agave varietals are known to flourish there. The agave are fermented with wild yeasts in cypress vats and double distilled in a copper pot still in the village of San Andrés in Xitlapehua, Oaxaca. Distillation is overseen by Maestro Mezcalero Don Valente Angel. The result is a vegetal, earthy mezcal with underlying notes of sweet tobacco, fruit.