Caskers Rewards members earn up to 4 store points back when buying this bottle.
Size750mL Proof101 (50.5% ABV)
FEW Spirits master distiller Paul Hletko teamed up with band Alice in Chains to create this rock inspired bourbon with a tequila twist.
Notify me when this product is back in stock. 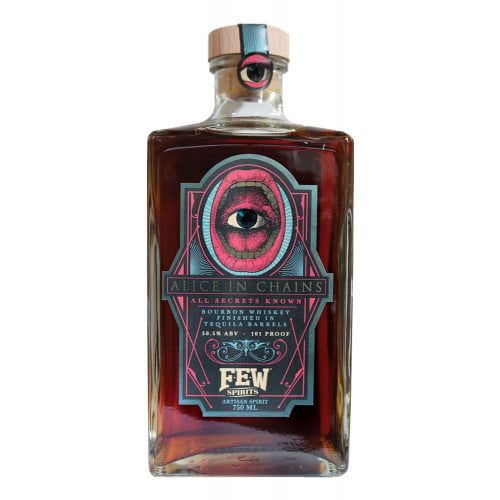 About Alice in Chains All Secrets Known Bourbon Whiskey

As a result, Evanston remained a dry town for over 100 years. It wasn't until Paul Hletko, owner and master distiller at FEW Spirits, began lobbying the town that the antiquated laws were lifted. "I'm the vice president of the PTA at my kids' school and I coach their soccer and T-ball teams", Hletko says. "People around town know me and what I'm about, which is handy when you're looking to change 100 years of laws." Today, Hletko and his team of master distillers produce FEW Rye Whiskey and FEW Bourbon Whiskey in the heart of Evanston, Illinois.

"There are no two spirits that have a closer association with rock and roll than whiskey and tequila," says Hletko. Bottled at 101 proof, All Secrets Known takes its name from the opening track of the band's 2009 release Black Gives Way to Blue and features a custom-designed label by artist Justin Helton. The black-and-blue color schemed label is a tribute to the album Black Gives Way to Blue, on which "All Secrets Known" can be found. This inspired whiskey is bold, sweet, and spicy, with grassy undertones of agave.

Bold, sweet, and spicy, with grassy undertones of agave.