Size1420mL Proof14 (7% ABV)
Made with the famously smooth, pure, and gently sweet Swedish Absolut Vodka, this canned cocktail is deliciously tropical and conveniently packaged in 4-packs of 355mL cans. Clocking in at 14 proof, the canned cocktail can be enjoyed straight from the can or served with garnish.
Notify me when this product is back in stock. 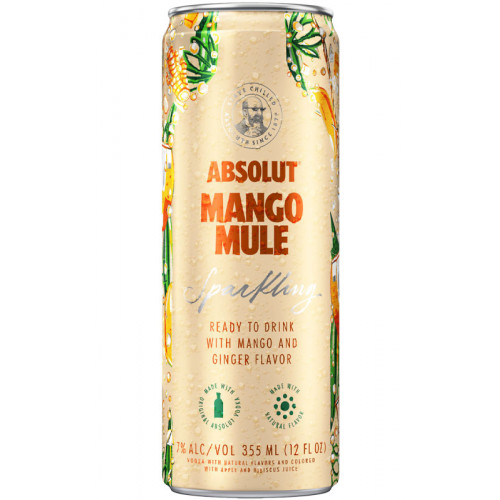 Crafted in Åhus, Sweden, Absolut Vodka is a smooth, pure, and pleasantly sweet spirit that's made from winter wheat and other, locally-sourced ingredients. The company helped pave the way for flavored vodka in the mid-1980s with their Absolut Pepar and Absolut Citron. Their newer lineup of canned cocktails continues the tradition. Absolut Mango Mule Cocktail is a convenient canned cocktail that's made with Absolut Vodka, all-natural flavors, and real fruit juice. Packaged in 4-packs of 355mL cans, it's a deliciously tropical as well as convenient drink that clocks in at 14 proof.

Grab your 4-pack of this tropical RTD cocktail today!

Absolut Vodka provides a solid base for this cocktail with its famously pure, smooth, and gently sweet taste profile. Here, it gets elevated with sweet, ripe mango, zesty citrus, and a touch of ginger, making for a tropical and gently spicy drink with a refreshing finish.