Size1420mL Proof18 (9% ABV)
Named after the Loyal Nine ― the group of patriots who stood up against the Stamp Act of 1765 ― this rebellious ready-to-drink cocktail clocks in at 9% ABV. The Non-carbonated drink is super-refreshing with a balance of juicy watermelon and bright citrus flavors.
Notify me when this product is back in stock. 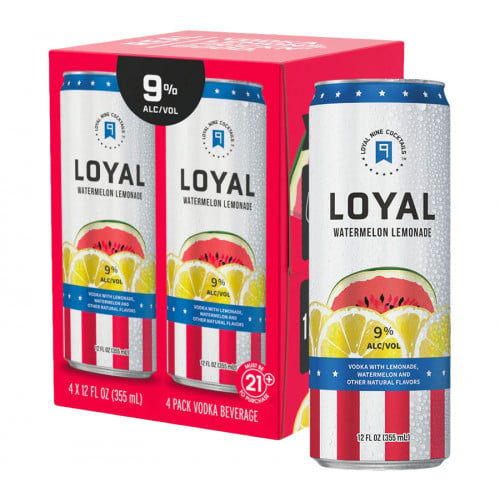 Crafted with real corn-based vodka and real lemons that make for a refreshingly crisp drink, the non-carbonated cocktails all clock in at 9% ABV. Loyal Nine Watermelon Lemonade is based on their regular Lemonade cocktail. The addition of watermelon flavor makes for a juicy and fruity drink that's available in a 4-pack of sleek 12 fl. oz. cans.

Get your 4-pack of this juicy drink today!

This canned cocktail is refreshingly fruity with a balance of sweetness and tartness. You'll find bright citrusy notes along with a burst of juicy watermelon.