Caskers Rewards members earn up to 2 store points back when buying this bottle.
Size750mL Proof114 (57% ABV)
Intense and complex, this 114-proof gin has a concentrated botanical profile that is achieved by cracking the botanicals open before the cold-compounding infusion.
Notify me when this product is back in stock. 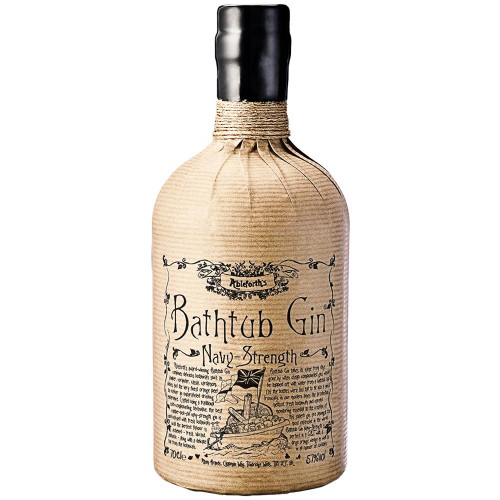 Their Bathtub Gin is the showrunner, and rightly so. Copper-pot distilled with juniper, coriander, and other botanicals, a portion of this gin is then cold-compound infused with another 6 botanicals (including dried orange peel, clove, cardamom, cinnamon, cassia bark), which takes an entire week. The Navy Strength version comes at a higher 114 proof and bolder, more intense botanical flavor that is achieved by cracking the botanicals open before the infusion.

Ableforth's was founded in 2011 by a group of 3 friends who share a love for spirits ranging from gin to rum and everything in between. The brand started with extremely small batches of 30 to 60 bottles at a time but has since grown considerably, expanding its production as well as the team. Taking inspiration from the past and combining it with a modern production process and approach, they craft innovative spirits, always putting the taste first and never compromising.

This has led them to adopt a slow infusion process as well as incorporate various super-premium ingredients in their creations, such as XO cognac. They have several gins, rums, and brandies in their lineup ranging from Cask-Aged, Old Tom, and Sloe Gin to Rumbullion! XO and Chilli & Chocolate spiced rum, Cherry and Dark Chocolate VSOP brandy as well as Summer Fruit Cup and Winter Mulled Cup.
Explore all Ableforth's bottles >>

Citrus and juniper lead the charge on the nose before being joined by cardamom, cinnamon, clove, and coriander. The palate is complex with plenty of citrus, juniper, and spices. Finishes long and warm with lingering clove and cinnamon notes.