Learn more
Size750mL Proof100 (50% ABV) *Please note that the ABV of this bottle may vary
Like all the 77 Whiskeys, this Bonded Rye Small Batch Whiskey was produced using a Coffey style still, resulting in a softer, sweeter spirit.
Notify me when this product is back in stock. 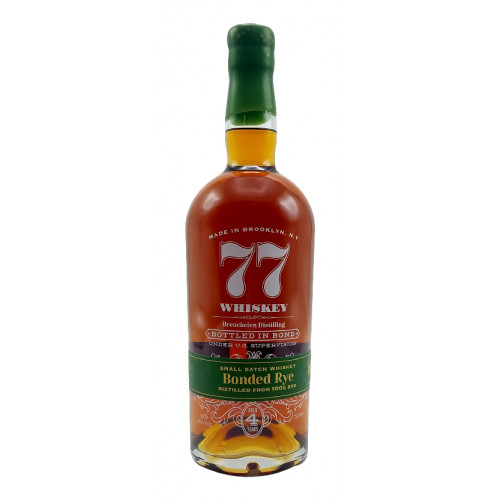 Breukelen Distillery not only makes their spirits from scratch, they also develop their own recipes by taste rather than tradition, an approach that has paved the way to help create spirits that taste different than the other bottles on the shelves. Each step, from milling grains into flour to bottling, takes place on 19th Street in Sunset Park, Brooklyn.

Like all the 77 Whiskeys, this Bonded Rye Small Batch Whiskey was produced using a Coffey style still, resulting in a softer, sweeter spirit. It is distilled and aged in 53-gallon barrels for a minimum of 4 years. To meet the more stringent requirements to be labeled Bottled in Bond, the series was distilled in one season (no blending between vintages), by one distiller, aged at least 4 years, and bottled at 100 proof (50% alc/vol).

Situated along the banks of the Gowanus Bay in Brooklyn, New York, Breuckelen Distilling Co. pays homage to the borough's founding fathers and its do-it-yourself work ethos.
Explore all Breuckelen bottles >>

Sweet and spicy with hints of oak, peppery rye spice and earthy notes. The finish is lingering with a touch of heat.