Learn more
Size750mL Proof88.9 Proof (44,45% ABV) *Please note that the ABV of this bottle may vary
After an initial six-year aging, this bourbon is aged for an additional two years in casks previously used to mature port wine.
Notify me when this product is back in stock. 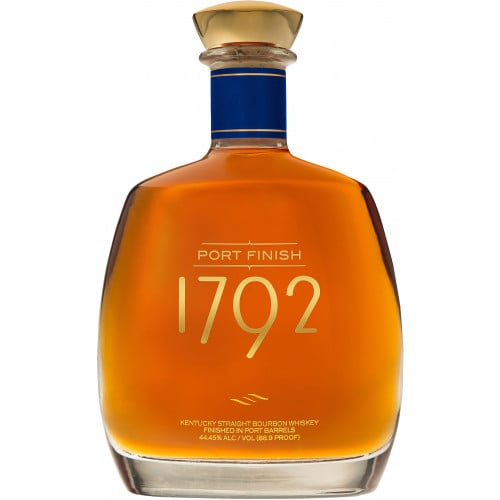 1792 Port Finish Small Batch Kentucky Straight Bourbon Whiskey is made from a mash of corn, rye and malted barley. While the use of corn in the bourbon's recipe adds classic notes of buttered bread, biscuits and roasted nuts, the heavy use of rye in the bourbon's mashbill yields a more complex and full-bodied whiskey.

After distillation, the bourbon is aged in new, American oak casks for six years in Warehouse Z on the distillery's estate in Bardstown, Kentucky. Warehouse Z is situated on the edge of a bluff and as a result, enjoys the intense heat and humidity that are ideal for maturing whiskey. “When it comes to barrel aging,” says Ken Pierce, Barton 1792's master distiller, “it's just like real estate — location, location, location. That's why 1792 ages in Warehouse Z up there on the bluff.” In addition, during the maturation process, Pierce samples each cask of bourbon as it rests to determine when the bourbon has reached its peak of maturity. “Quality in, quality out,” says Pierce, who has over two decades of experience at the distillery.

After its initial six-year aging, 1792 Port Finish Small Batch Kentucky Straight Bourbon Whiskey is aged for an additional two years in casks previously used to mature port wine. The subtle, sweet characteristics of the port casks lend aromas of caramel apples, vanilla and intense chocolate to the bourbon, as well as notes of strawberry jam, raisins, gingerbread and cinnamon toast. The finish is long and complex, accented by hints of sweet licorice and cherry pie.

Once the bourbon has matured for a total of eight years, it is brought to proof with water drawn from the Tom Moore spring. The iron-free, Kentucky limestone water — the same water used by Moore over a century ago when crafting his own whiskey — adds a subtle touch of complexity and depth to the bourbon.

This fantastic bourbon is limited in supply, and won’t be around long — make sure you pick up a bottle (or two) today!

Aromas of caramel apples, vanilla and intense chocolate to the bourbon, as well as notes of strawberry jam, raisins, gingerbread and cinnamon toast. The finish is long and complex, accented by hints of sweet licorice and cherry pie.