Learn more
Size750mL Proof111.6 (55.8% ABV) *Please note that the ABV of this bottle may vary
From W. Grant & Sons Rare Cask Reserve Series, this whisky is a unique blend comprised of malts from the 'ghosted' distilleries Intereleven, Ladyburn, and Dumbarton. 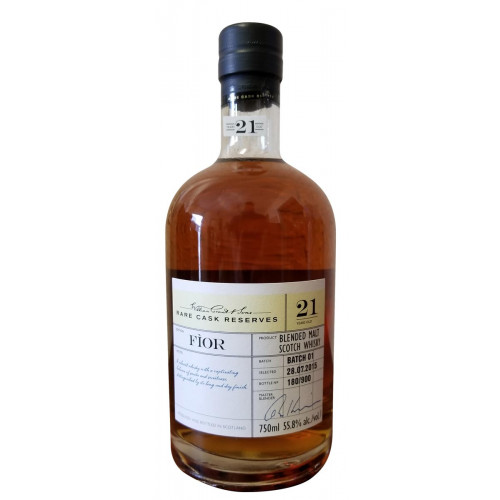 Born in December 1839, William Grant became a cattle herder at the age of 7 to supplement his family's income. As a teenager, Grant apprenticed as a cobbler and a clerk, and in 1866, he joined Mortlach Distillery as a bookkeeper. For the next two decades, Grant managed the affairs at the distillery, while secretly learning the art of distillation. In 1886, he resigned from his position as distillery manager and, together with his seven sons, two daughters, and one sporadically working stonemason, built his family distillery in Scotland.

William Grant & Sons is now a behemoth, home to several successful labels. From their unique Ghosted Reserve series comes this incredible ‘Fior’ 21YO blended malt. A compilation of 3 malts hailing from the shuttered Inverleven, Ladyburn, and Dumbarton 'ghost' distilleries which closed long ago.

The Inverleven distillery was established by Hiram Walker & Sons in 1938, and they were known for the production of single malts. The distillery closed in 1991. Nearby to the town of Dumbarton, the water used in production at Inverleven was drawn from the Loch Lomond.

Founded by William Grant & Sons in 1966, Ladyburn distillery was situated to the south west of Glasgow, just outside of the Ayrshire town of Girvan. The distillery only remained open for nine years until 1975. Ladyburn was built adjunct to the Girvan single grain plant (constructed in 1963).

This expression is the second release in William Grant's Ghosted Rare Cask Reserve series, comprised of some incredibly exclusive malts. This whisky gets its refreshing fruit notes from its Dumbarton grain elements, its light oaky, floral notes from Inverleven, and it’s robust, full-bodied profile from Ladyburn.

Citrus on the nose with notes of flower blossoms, toffee, and dried fruits. The palate is replete with citrus flavors, banana, and tart tropical fruits. The finish is creamy, with floral notes and chocolate nibs.