Caskers Rewards members earn up to 4 store points back when buying this bottle.
Size750mL Proof86.8 (43.4% ABV)
Wild Shot Reposado mezcal is double distilled from 100% agave Salmiana and aged for 6 months in new American white oak casks. True to the brand’s slogan – Blame it on the worm, every Wild Shot bottle contains an agave worm.
Notify me when this product is back in stock. 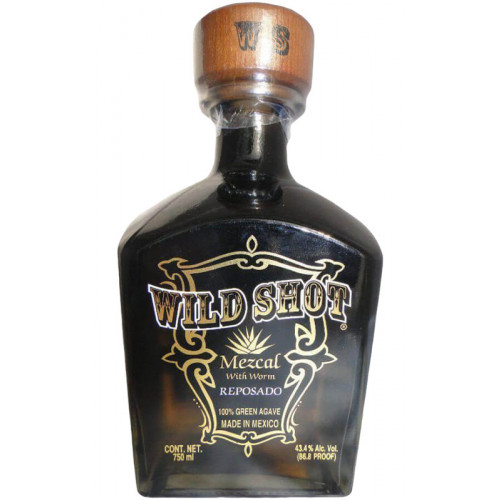 Toby Keith is a country singer who has released over 20 albums, had over 30 No. 1 hits, and sold over 40 million copies across the world. He is also a successful entrepreneur, with stakes in record labels and restaurants. Over a decade ago he decided to join the ranks of celebrities with own lines of spirits. Mexico being a running theme in his songs, Keith decided to put his name on mezcal. "The tradition and history of mezcal is magical to me," he once said in an interview. After tasting mezcals from a number of family-run distilleries and finding something to his liking, Keith launched Wild Shot in March 2011, and by the end of the year, the brand was the number one premium mezcal in the US.

Mezcal is a traditional Mexican spirit, made of only agave and water. It is usually hand-crafted by small-scale producers, who use methods that have been passed down from generation to generation. These traditional methods combined with the diverse micro-climates and terroirs of Mexico make mezcal a very diverse spirit. Mezcal is produced from more than 30 different types of agave, most commonly from espadin, tobalá, tobaziche, tepeztate and arroqueño. Wild Shot is made from 100% agave Salmiana grown in the state of San Luis Potosi. Salmiana is one of the few agaves tough enough to grow in the rocky and arid lands of the central Potosino plateau and can take between 15 and up to 25 years to reach maturity. This wild agave, also known as the green giant due to its large size, has one of the most unique flavor profiles of any agave.

Wild Shot Reposado is double distilled and aged for 6 months in new American white oak casks, giving the mezcal a smoky flavor with a long smooth finish. True to the brand’s slogan – Blame it on the worm, every Wild Shot bottle contains an agave worm.

The nose is smoky and slightly woody, with aromas of roasted agave. On the palate, the smoky and woody notes are accompanied by flavors of agave, citrus, vanilla and caramel. The finish is oaky and quite hot.