$44.99
Caskers Rewards members earn up to 2 store points back when buying this bottle.

Size750mL Proof70 (35% ABV)
Crafted with Watershed's very own bourbon, premium bitters, raw sugar, and Ohio cherry juice, this ready-to-drink old fashioned cocktail is a classic, made ultra-convenient.
Notify me when this product is back in stock. 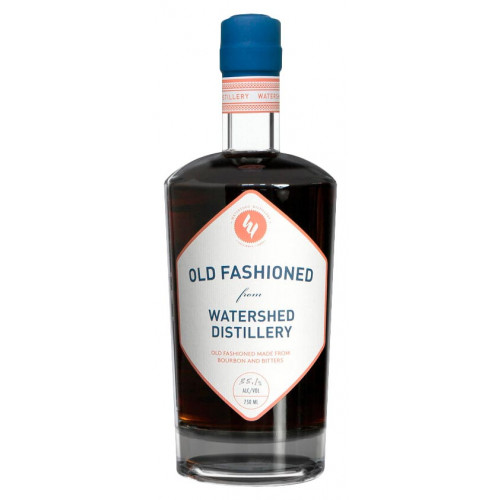 Greg Lehman conceived of the idea of Watershed Distillery, which is situated in the heart of Columbus, Ohio, when he was playing professional volleyball in Switzerland. "Locally produced spirits were common in the area," he says, and he was inspired to bring the concept back to his Ohio hometown. Together with co-founder Dave Rigo, the pair launched Watershed Distillery in 2010.

Watershed Bourbon Whiskey is crafted using a four-grain recipe, which calls for corn, wheat, rye, and spelt. Spelt, which is native to Ohio, is a type of wheat that fell out of favor with farmers and food processors decades ago because it is difficult to thresh. During distillation, however, spelt contributes a supple and slightly nutty flavor profile.

After Lehman sources the grains, they are milled and mashed before being distilled twice through a copper-pot still. Then, the bourbon is aged in a combination of 10, 30, and 53-gallon virgin American oak casks for approximately three years. The barrels provide the bourbon with an aroma of cedar and pine that gives way to touches of roasted corn, toffee, and vanilla. Notes of roasted nuts, almonds, and sweet caramel dominate the palate, and are complemented by a subtle undertone of wood. The finish is slightly spicy, with notes of wood tannins and cloves.

Care for a whiskey cocktail? Watershed has just the thing for you in the form of Watershed Old Fashioned, a ready-to-drink cocktail that's made with their award-winning bourbon, premium bitters, raw sugar, and Ohio cherry juice. They've done the work, the only thing you need to do is pour it over some ice and enjoy.

Made with bourbon, bitters, sugar, and cherry juice, you can expect a fruity and zesty nose with cherry and orange notes as well as a touch of spice. There's clove and dark fruit on the palate along with a balanced sweetness.