$37.99
Caskers Rewards members earn up to 1 store points back when buying this bottle.

Size750mL Proof74 (37% ABV)
This ready-to-drink cocktail is crafted with Bully Boy American Straight Whiskey, Angostura Bitters, and sugar. It's balanced perfectly and a fruity component can be added to taste, using an orange wheel or cherry.
Notify me when this product is back in stock. 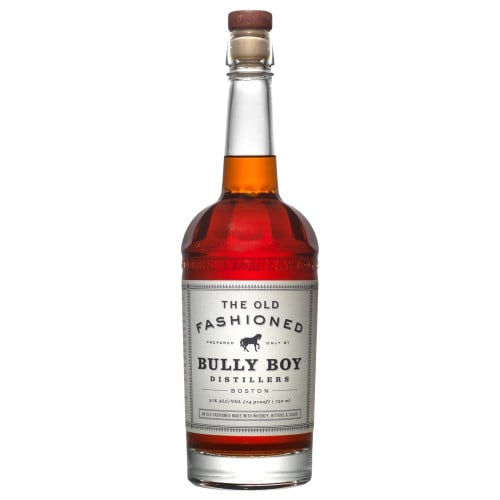 About Bully Boy The Old Fashioned

Bully Boy Old Fashioned is crafted with their own American Straight Whiskey, Angostura Bitters, and sugar. "It’s difficult to achieve that perfect ratio of whiskey, sugar and bitters, but that’s exactly what we’ve done with the Bully Boy Old Fashioned. By releasing a bottled version of the quintessential craft cocktail, we’re hoping to give drink enthusiasts a simple, no-fuss way to serve or enjoy a perfectly delicious Old Fashioned," said Dave Willis of this release.

Bully Boy Distillers was created by brothers Dave and Will Willis, who grew up on the Charlescote farm. While they gained some experience making cider and hard cider at a young age, they were drawn to distilling brandy. It wasn't until they cracked open the farm's vault ― a basement where their grandfather kept a collection of (pre) Prohibition-era spirits ― that they found their true calling along with the name for their budding distilling operation.

Right there in the vault was a photograph of Bully Boy, a draft horse that worked on the farm in the early 1900s. The brothers discovered that their great-grandfather was close friends with Teddy Roosevelt, whose famous expression "Bully!" made its way into the horse's name.

Their process involves 2 stills, a 150-gallon Kothe that they use for gins and a 750-gallon Christian Carl for everything else. They meticulously test each batch, making sure that the spirits are up to standard. They have a wide range of products ranging from vodka, rum, and gin, to amaro, whiskey, and mixed drinks.
Explore all Bully Boy bottles >>

It's a balanced profile with the sweetness and bitterness toned down, letting the whiskey notes shine. There are notes of caramel and nuts, along with a fruitiness. Add an orange wheel for an added citrusy component.