Size750mL Proof86 (43% ABV)
Crafted with their bourbon and rye whiskeys, demerara simple sugar, and bitters, this bottled cocktail is aged in second-use rye whiskey barrels in order for the aromas and flavors to marry.
Notify me when this product is back in stock. 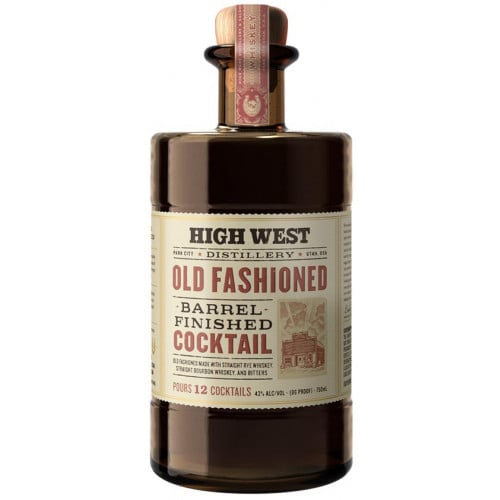 Situated at the bottom of the Quitting Time Ski Run in Park City, High West Distillery & Saloon is the first distillery in Utah since Prohibition and the only ski-in gastro-distillery in the world. "We wanted to call High West a "saloon", says David Perkins who founded the distillery in 2006 with his wife Jane, "because we wanted to pay homage to the history of saloons in the old West and the important role they played in each and every town that had one. The saloon was the main meeting place where town hall meetings were held, important announcements were made, and people went to eat and drink. We want people to share that sense of community and friendship over High West."

The distillery's humble beginnings with a 250-gallon still operating in a historic stable and garage grew into an international brand with 4 locations: a distillery with a 1600-gallon copper-pot still in Wanship, Utah, that offers tours and educational tasting, the Saloon and Nelson Cottage with the original still and whiskey-paired dinners, and a Saloon at the Salt Lake City airport. High West has garnered numerous awards over the years, including being named "Distiller of the Year" by Whisky Advocate in 2016.

The Barrel Finished Old Fashioned is a premium ready-to-drink cocktail that's a simple handful of ice and an orange twist short of a perfect drink. With their bourbon and rye whiskeys serving as the base, the cocktail adds unrefined raw demerara simple syrup and bitters to the recipe. The liquid is then finished in second-use rye barrels. "Our bar program has been the proving ground for these cocktail recipes. We experimented with and served variations on these cocktails from behind the bar for years, ultimately resulting in these final recipes. We developed them to be complex yet balanced, and they can be enjoyed on their own or when paired with food," says Steven Walton of High West. Each bottle holds 12 servings.