Be the first to review this product
This special limited-edition packaging comprises six 50mL bottles of Tullamore DEW's flagship Irish whiskey. It has gathered numerous awards over the years, including a Gold Medal at the International Spirits Challenge in 2020 as well as the World Whiskies Awards in 2019.
Add to Wish List
Notify me when this product is back in stock.

Tullamore D.E.W. Original Multipack is a special limited-edition packaging that comprises of six 50mL bottles of Tullamore DEW's flagship Irish whiskey, packed in a chips bag – it's the perfect packaging for your next Game Night or relaxed gathering with friends. This signature Tullamore expression is the original triple blend of grain, malt, and pot-still whiskey – all three styles of Irish whiskey. The grain contributes the sweetness, the malt the fruity notes, and pot-still the spice, resulting in an exceptional balance of flavor. Triple distilled and triple-cask matured in refill, ex-bourbon, and ex-sherry barrels, this smooth and delicately complex Irish blend is bottled at 80 proof. Tullamore D.E.W. has garnered numerous awards over the years, including a Gold Medal at the International Spirits Challenge in 2020 as well as the World Whiskies Awards in 2019.

Established in 1829 by Michael Molloy, Tullamore DEW is named after one of Ireland's most famous distillers: Daniel Edmund Williams. Williams started working at the original Tullamore distillery as a stable boy at just 15 years of age and rose to the position of Distillery Manager in just 10 years, later becoming the owner. The original distillery closed its doors in 1954 and the brand changed hands, ultimately ending up under William Grant & Sons in 2010. A new distillery was opened in 2014 on the outskirts of Tullamore, bringing whiskey production back to the town after 6 decades. Tullamore DEW is the second best-selling Irish whiskey in the world.

Get this limited-edition packaging today!

Medium amber gold hue. The nose greets with a mild blend of spicy, lemony and malty aromas and charred wood as well as vanilla undertones. The palate is warming with flavors of toasted wood and vanilla hints. The finish is smooth, gentle and lingering. 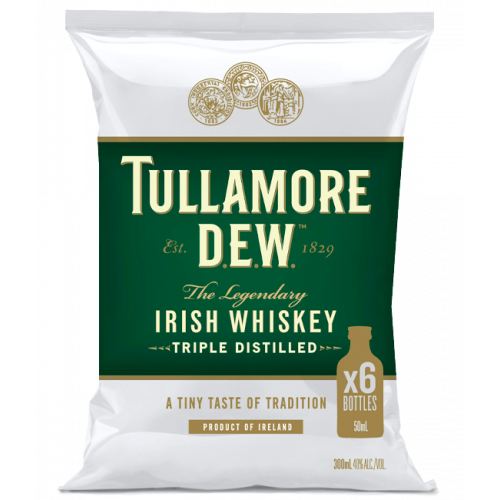