Learn more
Size750mL Proof80 (40% ABV) *Please note that the ABV of this bottle may vary
Made from locally-sourced rye, this vodka is distilled in a reflux still and passes through a catalytic converter in order to eliminate any impurities.
Notify me when this product is back in stock. 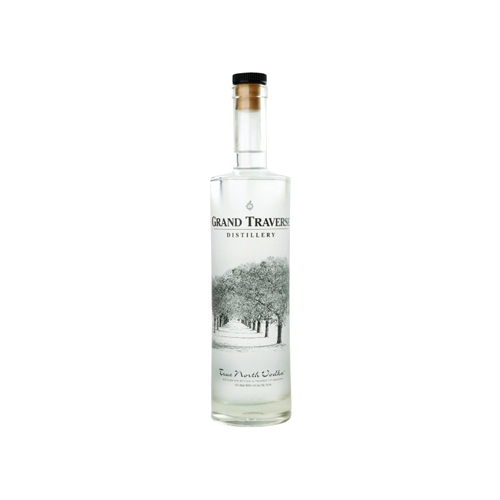 On the banks of Grand Traverse Bay — just a few hundred yards away from the 45th parallel — Kent Rabish is hard at work producing a batch of True North Vodka. Rabish, who opened the doors to Grand Traverse Distillery in 2006, marries the traditional art of craft distillation with modern technology in order to produce True North, a traditional Polish vodka.

Rabish works with local farmers to source only the finest rye-grain grown in Northern Michigan. He mills and ferments the rye, carefully monitoring it in order to ensure that the rye remains balanced and doesn't overheat. Following fermentation, which takes between 3 and 5 days, Rabish distills the mash in a 1,200-liter Arnold Holstein copper-pot reflux still imported from Germany.

The reflux still gives Rabish unprecedented control over distillation. Each time alcohol evaporates and condenses, it leaves impurities behind. Rabish's still allows him to lengthen the distillation process by increasing the reflux, making it so that each drop of alcohol in his 16-plate still evaporates and condenses approximately 1,600 times! During distillation, the vodka also passes through a catalytic converter, which eliminates trace impurities such as sulfur, resulting in an incredibly smooth and pure vodka. Following distillation, the vodka is gently filtered and brought to proof with glacial waters from the Great Lakes.

While eliminating impurities, Rabish is able to preserve the sweet, spicy essence of the rye, which defines True North Vodka. Its notes of rye and surprising burst of citrus earned True North the Gold Medal at the 2008 San Francisco World Spirits Competition and the 2007 Beverage Testing Institute's International Review of Spirits Competition.

End your dependence on foreign alcohol and try a bottle of True North Vodka today!

A nose of soft rye with no alcohol scent. Smooth, sweet and spicy with a burst of citrus on the finish.