Size750mL Proof80 (40% ABV)
This Canadian grain-to-bottle vodka starts with quality corn from Quebec. After being distilled over a period of 20 hours on their 24ft column still, the award-winning vodka is bottled at 80 proof. 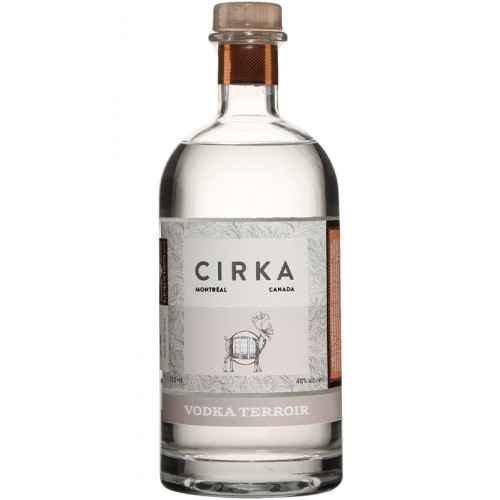 Founded in 2014 by Paul Cirka, Circa Distilleries' goal is to craft Canadian whisky. As is often the case with younger craft distilleries, Cirka has been making several clear spirits while waiting for the whisky to mature. The artisanal distillery is located in Montreal, where they employ sustainable practices, relying on local suppliers. This means that local grains, botanicals, and pure water are used in the production process.

Vodka Terroir is a grain-to-bottle spirit that is crafted with corn from Quebec that is distilled in their 24ft vodka column for 20 hours. Delicate, balanced, and super-smooth, the 80-proof vodka has received several medals, including a Gold Medal at the SIP awards and a Silver Medal at the San Francisco World Spirits Competition.

Get your bottle of this Canadian vodka today!

The vodka is crisp and pure with a soft nose that has hints of sweetness and nuttiness. The palate is delicate with a touch of caramel and hints of licorice that persist through the long, clean, and extra-smooth finish.