Be the first to review this product
Misadventure Vodka is the world’s first vodka made from unsold baked goods. This smooth vodka is 12x distilled and crafted to remove gluten, so despite being made from baked goods, it is gluten free.
$27.99
Add to Wish List

The story of Misadventure vodka started with a chance meeting between Whit Rigali and Samuel Chereskin at a North County San Diego bar. Whit, a bartender, wanted to create local craft spirits as tools for other bartenders, while Sam, an agricultural economist, wanted to find ways to improve food systems and show that doing good can also be viable. They decided to sustainably make quality spirits that everyone can enjoy. The two combined the golden rule of the outdoors – leave no trace – with the fun-loving aspects of distilled spirits, and created what they call hedonistic sustainability, the idea that you don't have to punish yourself to do good.

After 4 years of R&D in a cramped garage, and learning from the San Diego brewing and distilling communities, the two created Misadventure Vodka – a vodka made from food waste. In the US, 21% of all the fresh water the country uses in a year, 18% of its cropland, and 19% of fertilizer are wasted on uneaten food, which fills 21% of the country’s landfills. Every year American consumers, companies, and farmers spend $218 billion, or 1.3% of US GDP, growing, transporting, and disposing of 50–60 million tons of food that never gets eaten. Misadventure & Co. takes this food waste and turns it into something better: clean, smooth vodka. This makes every drink of Misadventure Vodka part of the solution, and the world's first "carbon-negative" spirit.

Misadventure Vodka is a smooth, clean vodka made from all types of unsold baked goods, whose starches are converted to sugars that are then eaten by microscopic yeast and turned into marvelous alcohol. The vodka is 12x distilled and crafted to remove gluten, so despite being made from baked goods, it contains under 10 parts per million (ppm) gluten, which is considered gluten free. The vodka is over 180x carbon filtered, and contains no additives.

The nose is slightly fruity and grainy. The smooth palate is rather sweet, followed by a clean finish with peppery sweet aftertaste. 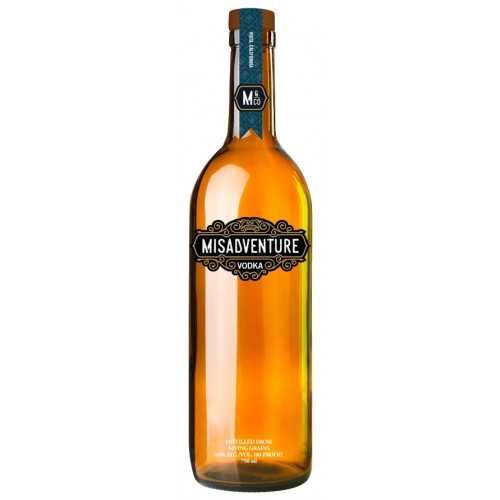