Learn more
Size750mL Proof86 (43% ABV) *Please note that the ABV of this bottle may vary
The first release in The Macallan’s Six Pillars Collection, this whisky was aged for a minimum of fifty years.
Notify me when this product is back in stock. 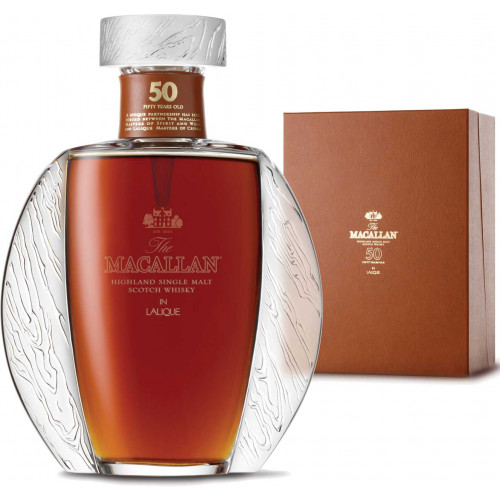 The Macallan 50 Year Old Highland Single Malt Scotch Whisky in Lalique was the first release in The Macallan’s Six Pillars Collection, and the extremely limited allocations for each market (only 470 bottles were released worldwide) sold out in record time. The whisky has a heady aroma of cumin, cardamom and dark maraschino, which leads to a palate filled with prunes and bitter chocolate. The finish, which is incredibly long, has pronounced notes of sherry oak and just a hint of peat smoke.

This magnificent whisky is both a true collector’s item and an investment — get yours today, before it’s gone forever!

Heady aroma of cumin, cardamom and dark maraschino, which leads to a palate filled with prunes and bitter chocolate. The finish, which is incredibly long, has pronounced notes of sherry oak and just a hint of peat smoke.