Learn more
Size750mL Proof89.6 (44.8% ABV) *Please note that the ABV of this bottle may vary
This single malt, which was aged for over 50 years, is the oldest whisky made by Highland Park, one of the most acclaimed distilleries in Scotland. 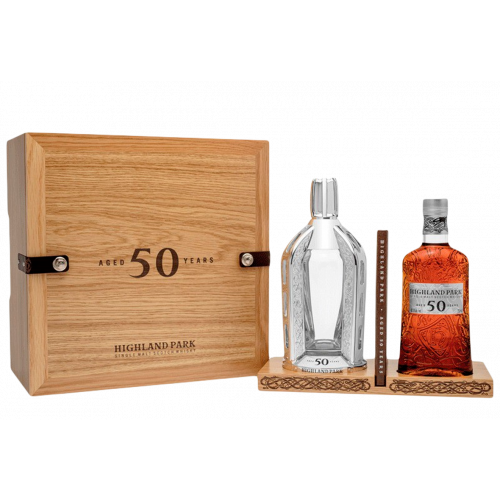 Today, over two centuries after its founding, Highland Park Distillery remains one of the few Scottish distilleries that continues to hand-turn, malt, and peat its own barley. "You have to be careful here on the malting floor," says Eric Tait, Highland Park's Maltman. "You find it can get a wee bit slippery underneath. I have to turn the malt every eight hours to prevent the roots getting tangled and to get it all aerated properly. The airing also helps it to grow. The malt will be on the floor for seven days and I'm running five floors at the moment."

Highland Park 50 Year Old Single Malt Scotch Whisky is the oldest and most prestigious whisky released by the distillery. It was made by marrying together five casks of whisky that were distilled in 1960 and then cask-harmonized, in order to ensure that the whisky achieved the perfect balance of flavor and consistency.

Each bottle of the whisky was hand-crafted from sterling silver designed by Maeve Gillies, an internationally renowned designer of engagement rings and jewelry. The bottle is intended to represent the confluence of the sea, weather and time-honored traditions that have guided Highland Park over the course of the past two centuries.

The whisky has a bright, mahogany hue, along with an aroma of tobacco, chewy leather, raisins and nutmeg. The aroma gives way to rich and spicy flavors, that are balanced by touches of brown sugar, molasses, wood tannins and caramel. The finish is long and warming, with a touch of spicy clove.

Only 275 bottles of this whisky were ever produced. Pick one up today!

Aroma of tobacco, chewy leather, raisins and nutmeg. Rich and spicy flavors, that are balanced by touches of brown sugar, molasses, wood tannins and caramel. Finish is long and warming, with a touch of spicy clove.

1.7 out of 5
(1 reviews)
Write a review
Real email address is required to social networks
Sign in
Login with Google
Login with Facebook
Or
We also recommend