Learn more
Size750mL Proof94 (47% ABV) *Please note that the ABV of this bottle may vary
Part of a limited-edition collection of Caribbean black spiced rums, The Kraken Attacks Illinois is as “dark as Lake Michigan on a moonless night”. Crafted with natural flavors and caramel color, this black spiced rum has apparently been spotted from the Mississippi to Wabash, even getting a taste of a deep dish pizza.
Notify me when this product is back in stock. 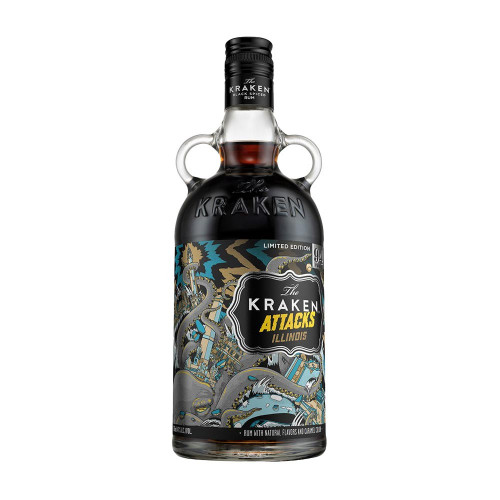 About The Kraken Attacks Illinois

Released in 2021, The Kraken Attacks is a limited-edition collection of Caribbean black spiced rums. The Kraken Attacks Illinois is as “dark as Lake Michigan on a moonless night”. Crafted with natural flavors and caramel color, this black spiced rum has apparently been spotted from the Mississippi to Wabash, even trying a deep dish pizza on the way. An exceptionally flavorful and smooth rum with notes of cinnamon, vanilla, and nutmeg, it delivers a lingering and spicy finish that is best enjoyed in classic rum cocktails.

Get The Kraken Attacks Illinois!