Learn more
Size750mL Proof95 (47.5% ABV) *Please note that the ABV of this bottle may vary
Only 90 bottles of this single malt, limited edition whisky, which was matured for 24 years, are available in the United States.
Notify me when this product is back in stock. 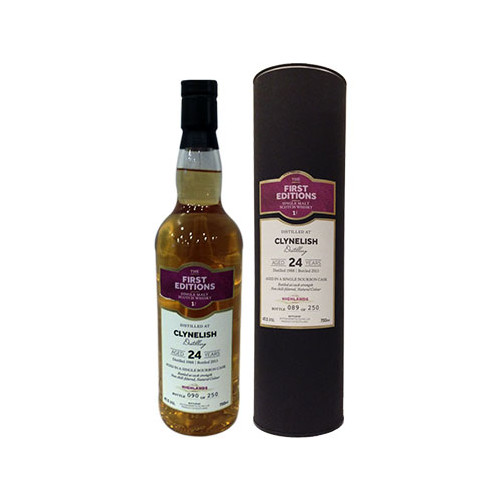 The First Editions Clynelish 24 Year Old Single Malt Scotch Whisky was distilled and then matured for 24 years in an American oak cask that was previously used to mature bourbon. In 2012, the whisky was bottled at cask strength without the use of chill-filtration or artificial coloring.

The whisky has an aroma of earthy minerals, malt and ripe fruits that gives way to balanced touches of oak, spices, tropical fruits and honey. The finish is full and slightly smoky, with a touch of roasted nuts, pine and spices that linger.

Only 90 bottles of this single malt, limited edition whisky are available in the United States. Pick one up today!

Aroma of earthy minerals, malt and ripe fruits that gives way to balanced touches of oak, spices, tropical fruits and honey. Finish is full and slightly smoky, with a touch of roasted nuts, pine and spices that linger.