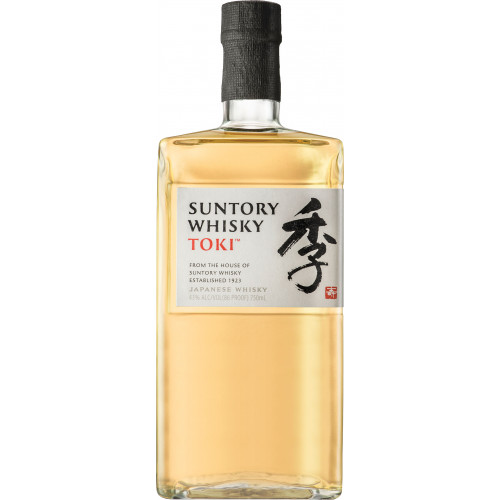 Although inspired by traditional Scottish distilleries, Torii envisioned a uniquely Japanese approach to whisky and chose a location for his distillery that offered a climate and terrain that were completely different than those of Scotland. Nestled on the periphery of Kyoto, Yamazaki Distillery is situated at the confluence of three rivers — the Katsura, Uji and Kizu — that provide the warm, damp environment ideal for the production and maturation of whisky.

Suntory Toki Japanese Whisky is a unique marriage of whiskies from Hakushu and Yamazki distilleries, as well as Chita Distillery, a single grain distillery in Aichi Prefecture on the Pacific coast of Japan. While the majority of Suntory’s blends use malt whisky from Yamazaki as their main ingredient, Chief Blender Shinji Fukuyo wanted to try a new approach for Suntory Toki Japanese Whisky, utilizing Hakushu malt whisky aged in American white oak and Chita heavy-type grain whisky as the blend’s two pillars. Finally, Fukuyo adds both American white oak-aged and Spanish oak-aged malt whisky from Yamazaki, providing the blend with even more flavor and complexity.

“By pairing these seemingly dissimilar but deeply accordant whiskies, Fukuyo’s insight overturned the old relationship between malt and grain and created a blend that is both groundbreaking and timeless,” says Suntory.

Suntory Toki Japanese Whisky has a clear golden color and aromas of fresh basil, green apple and clover honey. The palate is filled with bittersweet citrus fruits, such as grapefruit and green grapes, as well as pungent herbs like peppermint, thyme and rosemary. The finish, which is subtle and slightly sweet, leaves an impression of vanilla and ginger which lingers endlessly.

Pick up your bottle of Toki today!

Clear golden color and aromas of fresh basil, green apple and clover honey. The palate is filled with bittersweet citrus fruits, such as grapefruit and green grapes, as well as pungent herbs like peppermint, thyme and rosemary. The finish, which is subtle and slightly sweet, leaves an impression of vanilla and ginger which lingers endlessly.

2.8 out of 5
(5 reviews)
Write a review
Real email address is required to social networks
Sign in
Login with Google
Login with Facebook
Or
We also recommend