Size750mL Proof80 (40% ABV)
This Japanese whisky is inspired by its American counterparts. Crafted with a mash bill of approximately 75% corn and light malt, the 80-proof expression is aged in ex-bourbon casks.
Notify me when this product is back in stock. 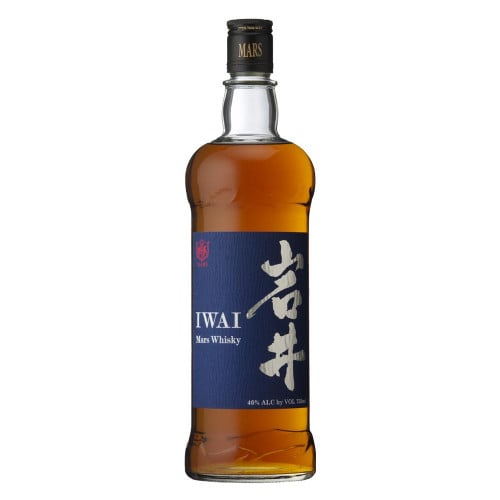 Mars Shinshu is Japan's highest whisky distillery, at 798 meters ― just over 2,600 feet ― nestled between Japan’s Southern and Central Alps. Mars Shinshu is owned by the Hombo family, who have been in the business of distillation for over a century. Whisky became a part of the Mars Shinshu production lineup in 1949. In 1984, Shinshu decided to move their southernmost Kyushu distillery to the picturesque alpine Miyada village, where the high altitude and cool climate make for suitable conditions for whisky-making. The whisky is produced from mineral-rich waters that pass through granite rock.

This whisky is named after Kiichiro Iwai, known as “The Silent Pioneer of Japan Whisky,” and the former mentor of Masataka Taketsuru, the founder of Nikka and Suntory Whisky. Iwai sent Taketsuru to Scotland to learn the art of whisky-making. Taketsuru returned to Japan, presenting a whisky-making report ― the Taketsuru Notes ― to Iwai. Taketsuru was the first Japanese to learn the art of whisky-making. Mars Shinshu’s whiskies continue to be some of the most inexpensive Japanese whiskies on the market, and they are full of high-quality character and complex flavor.

Mars Iwai Blue Label Whisky takes its cues from bourbon. Its mash bill is heavy on the corn (around 75%) with light malt providing balance. Aged in ex-bourbon casks, the 80-proof expression is floral and fruity with oak, vanilla, and caramel notes.

Grab your bottle of this bourbon-inspired Japanese whisky today!

The nose is floral with fruit, caramel, corn, and vanilla. You'll find vanilla, burnt sugar, orange zest, oak, and hints of mint on the palate. The finish is brisk and smooth.