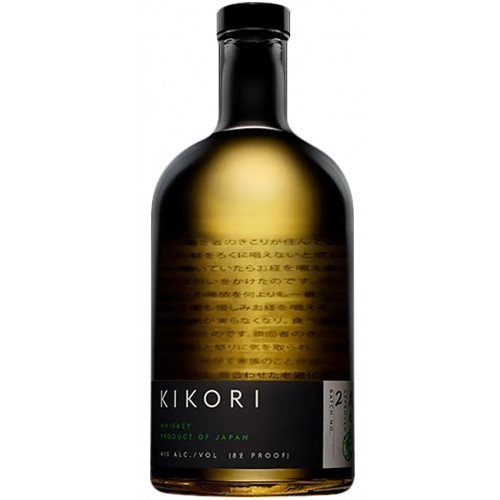 Kikori was launched in the Fall of 2015 by Ann Soh Woods, an up and comer in the Japanese Whisky scene. Ann, founder and owner of Soh Spirits, is a bold spark of brilliance, with her fresh take on Japanese whisky. Her imaginative 100% rice based Japanese whisk(e)y -which she chose to spell with an “e,” to distinguish Kikori from other Japanese whiskies- won gold at the 2016 San Francisco World Spirits Competition.

The Alcohol and Tobacco Tax Bureau didn't know how to classify it at first, but it is a whiskey. It is similar to its cousin Shochu -a Japanese alcohol distilled from rice or sweet potatoes- but is served at a higher 41% ABV than shochu's 25-35%.

Wood’s had a fascination with whiskey, and her frequent trips to Japan, roused intrigue for the rituals and traditions of Japanese alcohols. Rice is a huge part of Japanese culture. By distilling whiskey from this prominent grain, Woods seeks to capture the spirit of Japan. This is how the imaginative whiskey was born. Introducing bold ideas like these into such a male dominated old school market like the whiskey industry had its challenges. “It is always assumed that I am a sales representative when I visit accounts, and it is always a pleasant surprise when they find out I am the founder.” Said Woods in an interview with Munchies Magazine.

Not to mention overcoming language and cultural barriers. Kikori is distilled in Kumamoto on the island of Kyushu, Japan, the birthplace of Kikori. When approached with the unconventional idea for her Japanese whiskey, distillers were skeptical, but the new drink has gained popularity. Woods depended on a master distiller for the formula, and it has become a success.

Kikori states that the rice is sourced locally from the Kumamoto rice paddy. Located alongside the Iwase River, Kumamoto has a distinct volcanic rich soil. The signature rice is cooked in giant steel steamers, and distilled using pure mountain water, the rice ""has been cultivated in southern Japan for over 2000 years in the nutrient rich, volcanic soil of Kyushu Island. The rice grows in the rich volcanic loam formed through eons of lava flow and ash deposits.” It’s distilled with fresh mountainous waters that flow through ancient volcanic rocks that are millions of years old.

The rice gives it a unique aromatic profile with a floral and fragrant aroma and a velvety smoothness to the palate. No coloring or sugar is added, and it ages in American, French, and sherry oak anywhere from three to seven years.

Pick up a bottle of Kikori today!

Kikori is a beautiful golden color. It is fragrant and floral on the nose, with notes of caramel, tree fruits, vanilla. The palate is velvety, with flavors of melon, toasted almonds, tart apple, oak, and sherry. The finish is clean and bright.