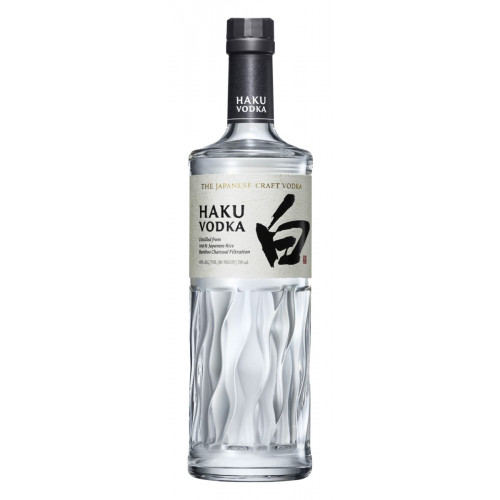 In February 1899, Shinjiro Torii opened a store in Osaka, Japan that traded imported wines. Within a decade, Torii began producing his own sweet grape wine called Akadama Port Wine, which became wildly popular throughout Japan. In 1923, Torri — fascinated by whisky his entire life — decided to expand his business and began construction of the Yamazaki Distillery, Japan's first-ever whisky distillery.

The name Haku does not merely means "white" but celebrates the origin and the craft of this Premium Japanese Vodka. The naming Haku pays tribute to its origin "Hakumai" (白米 ) — 100% pure Japanese white rice, and craft of mastering a "Jyunpaku" (純白) — pure and brilliant Vodka carefully filtrated through bamboo charcoal for an unparalleled soft, round and subtly sweet taste.

Part of Haku’s distinctive creation process is the proprietary bamboo charcoal filtration method. The charcoal absorbs the impurities present in the distillate. This technique dates back to Japanese tradition where charcoal was used to "sweeten" the water for tea.

Soft aromas played up by sweet, delicate floral aromas of rice. The palate is rich, gradually enveloping the mouth with the natural sweetness and complex flavor of the rice. The finish is smooth with a sophisticated, pleasantly lingering sweetness.