Size750mL Proof86 (43% ABV)
A reproduction of the original 1903 Stronachie. Aged for at least 10 years in ex-bourbon, this is a delicate small batch Speyside whisky.
Notify me when this product is back in stock. 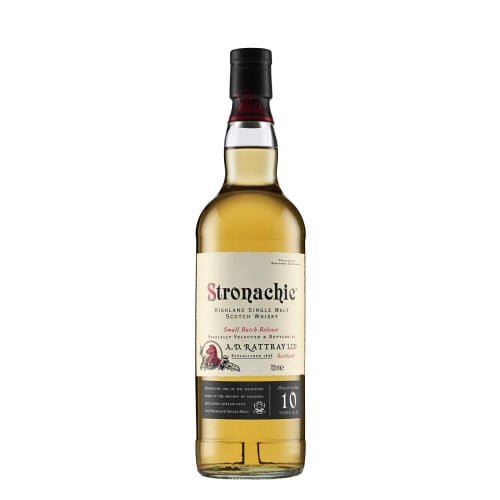 Stronachie, which means ‘prominent nose’ in Gaelic, is one of those legendary names in the history of single malt Scotch whisky. Built by Alexander & MacDonald in the wild and remote Ochil Mountains in Perthshire in 1890, the distillery sadly closed its doors in 1928. Before its remote location contributed to its demise, A. D. Rattray distributed the widely popular brand.

Decades later, A. D. Rattray got their hands on a bottle of an original 1904 Stronachie – one of only four left in the world. Taking a small sample from this precious bottle, it was tasted and compared to other Highland malt whiskies. The distinct, delicate style and flavor were revived with a spirit from Benrinnes Distillery – another remote Speyside distillery below Ben Rinnes mountains. Aged for a minimum of 10 years in ex-bourbon casks, a small batch of about 20 casks was selected for blending and bottling at 86 proof. A delicate and aromatic reproduction of an ancient dram, this is a special addition to your home bar.

Get Stronachie 10YO today!

Straw gold hue. The nose offers soft honey, heather, malt, and fresh biscuits. The palate is delicate and smooth with biscuits and luscious honey, lingering pepper and cereal notes. The finish is balanced and long.