This product is available in: MD, NH, NY Unfortunately, we can't ship to PO Boxes and APO addresses.

Size750mL Proof86 (43% ABV)
The Lot 20 release marks the 20th anniversary of the series. Each year the head distiller and blender picks out the casks from their growing library of aging whiskey, every release being more complex than the previous one. This one contains a number of diverse casks of whiskey aged 4.5 to 21 years.
Notify me when this product is back in stock.

This product is available in: MD, NH, NY Unfortunately, we can't ship to PO Boxes and APO addresses. 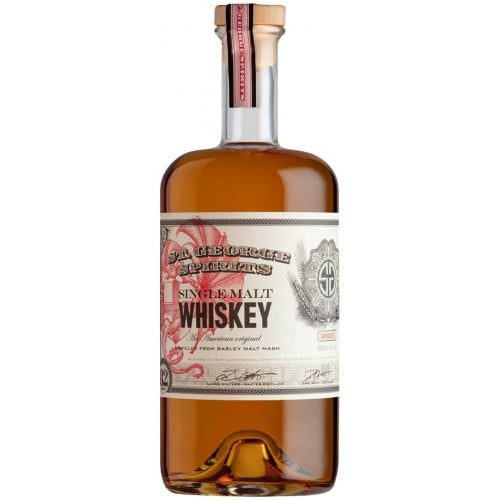 Founded in 1982 by German-born Jörg Rupf, St. George Spirits is one of the oldest craft distilleries in the United States. The distillery, housed in an old World War II airplane hangar on a former naval base on the edge of San Francisco, is home to Lance Winters, nuclear engineer, mad scientist and St. George's master distiller, and Dave Smith, St. George's chief blender.

Winters and Smith, who are widely-known for experimenting with different types of spirits, have a laboratory dominated by a 10-liter test still, which sits adjacent to the glass beakers and graduated cylinders that cover every inch of their counter space. Next to the dusty chalkboards caked with equations for the conversion of sugar to alcohol and intricate diagrams of molecular structures are bottles of experimental whiskeys, vodkas, and even an aging balsamic vinegar.

If St. George Spirits is the original American craft distillery, then St. George Single Malt Whiskey is the original American single malt. First launched in 2000, it's now celebrating its 20th anniversary with the release of Lot 20. The mash bill has stayed the same through those 2 decades and consists of two-row barley and Bamberg malt. But each year's Lot has been increasingly more complex, due to more and more interesting barrels being accumulated in their library. Lot 20 had head distiller and blender Dave Smith craft an 86-proof blend of whiskey from Kentucky bourbon, Tennessee whiskey, American and French oak apple brandy, port, and California Sauternes wine casks. The ages of the whiskeys range from 4.5 years up to 21 years.

The nose opens with inviting aromas of marmalade, stone fruit, cocoa, and a distinct nuttiness. There's coffee, cherry, chocolate, and cola on the rich and complex palate. It finishes smooth and long.