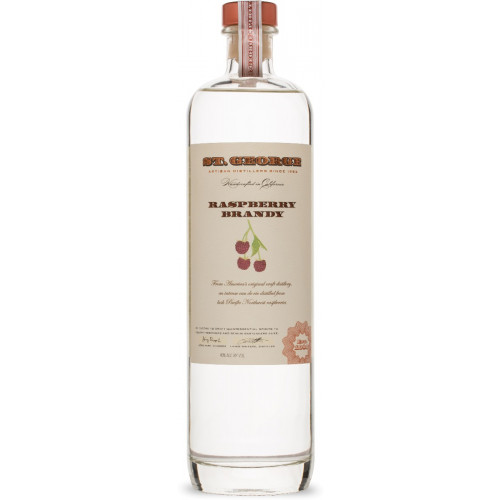 Winters, who is widely-known for experimenting with different types of spirits, has a laboratory dominated by a 10-liter test still in addition to the glass beakers and graduated cylinders that cover every inch of his counterspace. Next to the dusty chalkboards caked with equations for the conversion of sugar to alcohol and intricate diagrams of molecular structures are bottles of experimental whiskies, vodkas and even an aging balsamic vinegar (it’s 14 years old already).

“Our objective with St. George Raspberry Brandy,” explains Winters, was to “take an olfactory snapshot to capture exactly what raspberries smell like at their peak of ripeness. We used the whole fruit in its entirety in a deliberate effort to maximize the most elemental and essential flavors and aromas.” Once the raspberries have been harvested, they are distilled through copper pot stills without the use of sugar or any other artificial ingredients.

The brandy has an extraordinary texture and flavor profile, with rich waves of soft fruit, raspberries, oak and cinnamon that are complemented by a mineral touch. The brandy was named one of the Top 75 Spirits of 2014 by F. Paul Pacult’s Spirit Journal. Pick up a bottle today!

Extraordinary texture and flavor profile, with rich waves of soft fruit, raspberries, oak and cinnamon that are complemented by a mineral touch.