Caskers Rewards members earn up to 1 store points back when buying this bottle.
Proof90 (45% ABV)
This feature represents three unique expressions of gins produced by one of America's most creative craft distilleries.
Notify me when this product is back in stock. 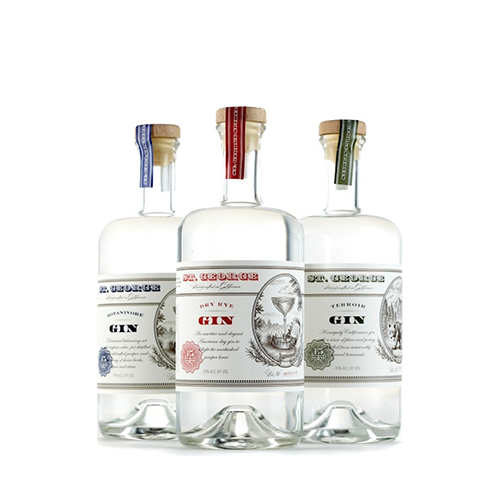 This feature represents three unique expressions of gins produced by one of America's most creative craft distilleries.

Made using juniper, Douglas Fir, California bay laurel, coastal sage and coriander seeds, along with a number of other herbs and botanicals, St. George Terroir Gin is a true California Gin. The coriander seeds are roasted inside a well-seasoned wok, which contributes an earthy, aromatic bouquet to the gin. In addition, the Douglas Fir and coastal sage are distilled individually through Winters' 250-liter copper-pot still, which minimizes seasonal configurables in the botanicals. Finally, while the fresh bay laurel leaves and juniper berries are infused through the still's botanical basket, the remainder of the botanicals are placed directly in the pot, resulting in a cleaner and crisper flavor.

St. George Terroir Gin has a stunning bouquet of fresh, forest aromas, including pine and oak. The woodsy notes are complemented by bursts of juniper and sage, and lead to a crisp finish. St. George Terroir is "spectacularly evocative"according to Food and Wine Magazine, and "one of the most distinctive gins made in America"according to GQ Magazine.

While the juniper, bay laurel and fresh cilantro are added to the gin's botanical basket, the other 16 botanicals are steeped overnight in the copper-pot still. Then, gentle steam heat is added to the still, in order to coax out the flavors and aromas of the herbs and botanicals.

Fresh and slightly herbaceous, St. George Botanivore Gin has bright notes of citrus, earth and spice that are complimented by subtle floral undertones. The gin earned a score of 93 points from Wine Enthusiast Magazine, which selected it as one of the Top 50 Spirits of 2012. In addition, Park and Bond wrote that it was "a sunshine-drenched greenhouse of a spirit"while Esquire called it "complex and bright."

St. George Dry Rye Gin is made using an unaged rye as the base spirit, giving the gin its warm and malty flavor. The gin is then infused with just six botanicals, including juniper, black peppercorn, caraway, coriander, grapefruit peel and lime peel.

The gin has warm, peppery flavors with a hint of underlying citrus. Playboy Magazine said that St. George Dry Rye Gin was the "slightly sweet and subtly spicy version that shines all on its own,"while The Washington Post said that it was "something like a cross between traditional London dry and a rye whiskey,"adding that it was "absolutely amazing in Negronis."

This pack of gins represent three unique expressions by one of America's most creative craft distilleries. Pick up all three today!

Slightly fruity aroma, with hints of cinnamon and vanilla. Subtle touches of lemons and dried fruits compliment bolder notes of peat smoke, and a rich, chewy texture. The finish is long and luxurious, and ends with a hint of espresso.