Size750mL Proof80 (40% ABV)
Crafted in the Mongolian capital, this vodka is made in small batches and earned the Seal of Excellence from The Tasting Panel Magazine.
Notify me when this product is back in stock. 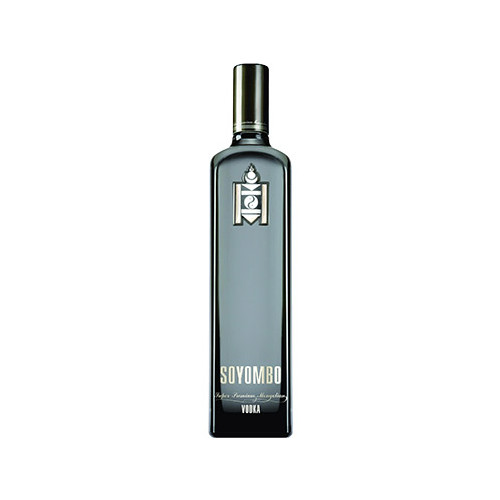 At its peak in the 13th century, the Mongolian Empire controlled nearly 25% of all land on Earth and stretched from the Pacific Ocean to the Caspian Sea. Under its stewardship, the world saw revolutionary advances in technologies, including the distribution of gunpowder, paper and currency. In addition, the Mongolian Empire revolutionized many of the methods and much of the equipment used to distill spirits.

Soyombo Vodka is crafted from a centuries old vodka recipe and is made from organic wheat cultivated from the Selenge Province in Mongolia. Once the wheat is harvested, it is mashed and fermented before being distilled six times. Following distillation, the vodka is filtered for five days over charcoal, quartz, diamond and silver. This filtering process removes any remaining sediment in the vodka, and produces an incredibly pure and clean spirit. After the vodka has been filtered, it is brought to proof with pure spring water sourced from the Bogd Khan Mountain, which overlooks the Mongolian capital.

As a result, the vodka has an aroma of fresh bread, anise and chocolate. The aroma gives way to a medium body, with touches of vanilla cream, citrus, toast and black pepper on the palate. The finish is dry and bold, with hints of sweet citrus and pepper.

Soyombo Vodka earned the Seal of Excellence from The Tasting Panel Magazine, which said that the vodka was "sumptuous,"and its finish was "exotic and laced with espresso bean." In addition, the vodka earned the Gold Medal at the World Spirits Awards in 2012, and the Superior Taste Award at the International Taste & Quality Institute Competition in 2012. It also earned four stars from F. Paul Pacult's Spirit Journal.

Aroma of fresh bread, anise and chocolate. Aroma gives way to a medium body, with touches of vanilla cream, citrus, toast and black pepper on the palate. Finish is dry and bold, with hints of sweet citrus and pepper.