Size750mL Proof48 (29% ABV)
“First, we distil our award-winning London Dry Gin on our copper stills. Then we leave it to rest on wild sloe berries, picked in the autumn. The result is a truly handmade sloe gin that is subtle, complex and bursting with flavour.” -Sipsmith
Notify me when this product is back in stock. 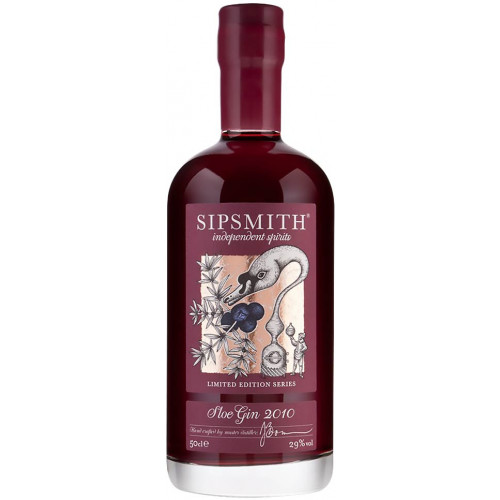 Once the botanicals arrive at the distillery, they are distilled through a copper-pot still named Prudence (Prudence is able to produce approximately 280 bottles of gin each day). "Prudence is the first copper still installed in London in nearly 200 years. We designed her with Germany's oldest distillery producers, Christian Carl — a small, family business that has been crafting stills since 1869. She is the only one like this in the world. "The still is designed with a bespoke pot, column still and carter head, which makes it incredibly versatile.”

Sloe berries are a hedgerow fruit in the plumb family. Rarely consistent berry seasons yield annual harvests that almost always vary, due to the unpredictable English climate. This variety in harvest is a trait very characteristic of wine, in that each vintage batch that is produced has its own unique character. Each autumn Sipsmith picks their sloe berries, which are then frozen and steeped in their London Dry Gin, for three to four months. This process gives the gin a “jammy, marzipan flavor…The result is a truly handmade sloe gin that is subtle, complex and bursting with flavour” (Sipsmith).

Pick up a bottle of this sloe gin today!

On the nose are gorgeous redcurrant and ripe winter fruits with stone-fruit almond. On the palate cassis comes through with soft cherry hints and a rounded fruitiness. The finish is a velvety mouthfeel, and a balanced sweetness.