Size750mL Proof84 (42% ABV)
This special expression from FEW spirits is specially designed for brunch eaters everywhere. With the classic French 75 cocktail in mind. This distinct gin is infused with earl grey tea botanicals. "It's 10 am somewhere and FEW Breakfast Gin is here to go with your pancakes." -FEW
Notify me when this product is back in stock. 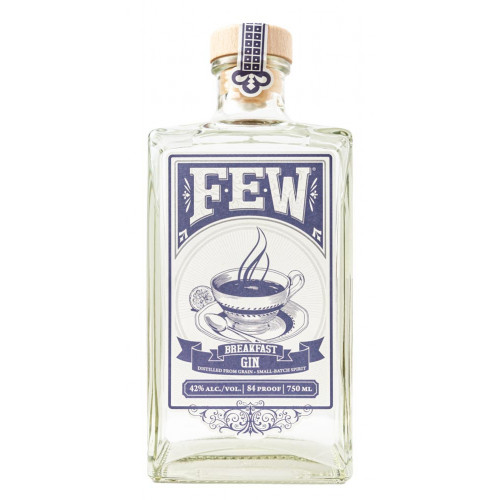 For over 100 years, Evanston remained a dry town. It wasn't until Paul Hletko, owner and master distiller at FEW Spirits, began lobbying the town that the antiquated laws were lifted. "I'm the vice president of the PTA at my kids' school and I coach their soccer and T-ball teams," Hletko says. "People around town know me and what I'm about, which is handy when you're looking to change 100 years of laws.”

This special expression from FEW spirits was designed by distiller Steven Kaplan. Catered towards brunch eaters, with the classic French 75 cocktail in mind, they had initially considered adding coffee to make this gin distinct, but instead went with earl grey tea as a botanical, which was incorporated in the recipe to compliment juniper, citrus profile of the spirit.

Just like FEW Spirit’s other Gins, this expression has a complex, grain-forward mash bill made from corn, wheat and barley.

On the nose are aromas of bread, coriander, and lemon, tailed by notes of “brewing earl grey.” Hidden notes of lavender and black tea begin to emerge, layered above a hint of menthol, hops and barley.

The palate is refined, with earl grey, bergamot, citrus and fresh juniper notes. Mid-palate has the signature FEW creaminess and a burst of cinnamon on its dry finish. FEW Breakfast Gin is bottled at 42% ABV.

Pick up a bottle of this unique gin today!

On the nose are aromas of bread, coriander, and lemon, tailed by notes of “brewing earl grey." Hidden notes of lavender and black tea begin to emerge, layered above a hint of menthol, hops and barley. The palate is refined, with earl grey, bergamot, citrus and fresh juniper notes. Mid-palate has the signature FEW creaminess and a burst of cinnamon on the dry finish.