$41.99
Caskers Rewards members earn up to 2 store points back when buying this bottle.

Size750mL Proof109 (54.5% ABV)
The last rum issued by the royal navy to its seafaring enlistees, this release commemorates the 36th anniversary of Black Tot Day. 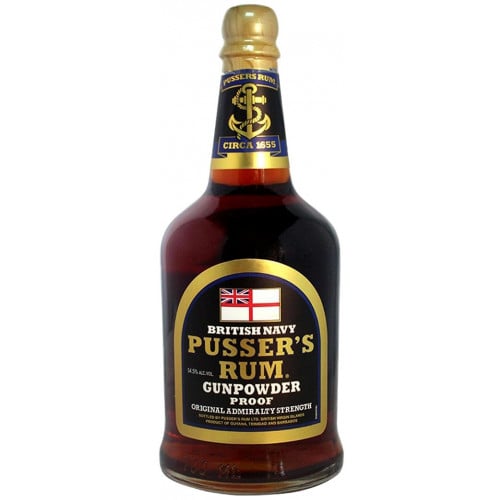 The life of a 17th century British Navy seaman was not an easy one.

“To prepare for a face off, the iron men in their wooden ships found both revival and salvation in Pusser’s Rum, as well as companionship for downtime reverie. From the earliest days of the Royal Navy, these foolhardy brave hearts were issued a daily ration or “tot” of rum by the ship’s “Purser,” a word the sailors later coined as “Pusser.”

Pusser’s Rum is a tradition that grew out of necessity. The daily drink ration for English sailors was initially a gallon of beer. This proved unsustainable. Rum eventually replaced beer in 1655, due to the more concentrated ABV, much less quantity was required.

But higher ABV led to heavy inebriation aboard British naval fleets, which began to pose a problem. It was then decided to dilute the rum rations, and servings became regulated in 1740 when a rum ratio of 4:1 was instated.

From the mid 17th to 18th centuries, shipboard life was incredibly difficult. A diary of member of the British Navy, George Hodge, reveals the daily struggles and mundanities in the life of a seaman. His 500 page diary, recorded the 192 formations of the ships massive billowing sails: 1. Enemy is in sight, 2. Prepare for battle, 10. Enemy is retreating full speed… imagine at a moments notice, being required to preform any of these formations, let alone being under the influence while executing them.

Not to mention the ever present danger even when ships were not in battle… “On December 26, 1812, an entry reads: "A fresh breeze a strange sail in sight. Empl painting quarterdeck. Fell from the for top mast Mathew Donelson and was drownded." Another entry reads: "July 19 light breeze at 5am picked up body of John Carter and buried him on the Isle of White."

“The daily issue of Pusser’s Rum was the highlight of the day. In those days, battles were fought “eyeball-to-eyeball.” The mental acuity and alertness required to pack a cannonball into a muzzle loader was very great.

Consequently in 1970, the Admiralty Board ended the daily issue of Pusser’s Rum in the Royal Navy on July 31st, 1970. This date since then is referred to as “Black Tot Day.” The rum issue was one of the longest unbroken traditions in seafaring history.

In 1979 Charles Tobias resurrected the historical recipe, forming Pusser’s Ltd. in the British Virgin Islands. His company produces their Pusser’s Rum following the blending information and the traditions of the Admiralty, including producing the rum from wooden pot stills just as it had been the tradition for over 200 years.

Pusser’s Gunpowder Proof- the last rum issued by the modern Royal Navy to its enlistees in 1970- commemorates the 36th anniversary of Black Tot Day. This aged overproof expression is bottled at 54.5%, the formula last used by the Admiralty, and distilled from 18th century vintage wooden pot stills from the Guyana’s Demerara River Valley, that yield a depth of flavor, infusing the rum with an abundance of esters.

Get your black tot today!

The nose is filled with pungent molasses, treacle, toffee, honey and vanilla with oak, cinnamon, nutmeg and ginger. The palate is full-bodied with an enhanced flavor profile of leather, tobacco, spices, and cassia. The finish is long, smooth and mellow.